By Amber Bonem | You’ll find the newly opened CrossFit Humidity in Shell Point and it’s a place where CrossFit isn’t just for the elite athlete. Korey and Danielle Bromery, owners and coaches, created CrossFit Humidity with the goal of opening a CrossFit gym where everyone can participate.

Armed with their health and fitness backgrounds, CrossFit Humidity was born. Everyday there is a W.O.D., or Workout of the Day. Programs are created and are comprised of constantly varied functional movements performed at high intensity. Now, don’t let that intimidate you. “We don’t just throw you to the wolves,” said Korey.

If you’re new to CrossFit, you’ll take the Foundations course first. It’s three 1-hour sessions spread over three days where one of their coaches will teach you the 9 fundamental movements of CrossFit. After that, you can join the rest of the athletes in the regular class schedule.

If you’re still a little unsure, don’t be. Korey, and the rest of the coaches, believe in building the programs to what you are capable of. There are various levels, such as RX+ for the more competitive athletes, and RX-light for the beginners. Everything can be modified regardless of where you are in your fitness journey. They will even be introducing CrossFit Kids this fall.

The big thing with CrossFit Humidity is that it’s not just a fitness program. It’s a community. Members are welcome to bring their kids and to stay and chat with fellow members. At CrossFit Humidity, you’ll find ample support and encouragement, regardless of your goal.

Korey is a former active duty Marine and is in school for his degree in elementary education. Passionate about helping kids, part of Korey’s goal is helping youth through programs such as his ‘Call me MISTER’ program (Mentors Instructing Students Towards Effective Role Models). Korey’s varied fitness background consists of training for things like TRX, spin, Marine HIIT and has also led Beaufort Academy’s Summer Strength and Conditioning Program.

Danielle’s own impressive background is another key component of CrossFit Humidity. She’s a native Beaufort girl and played several sports all through school before making her way through nursing school. During her time in college, like many colleges kids, she found it hard to balance the demanding school curriculum while maintaining a healthy lifestyle. She agreed to a free trial workout at a local CrossFit gym and was hooked. She even met her husband, and co-owner of CrossFit Humidity, Korey there. Because of her experiences, she is more capable than most to help people get on track with CrossFit. 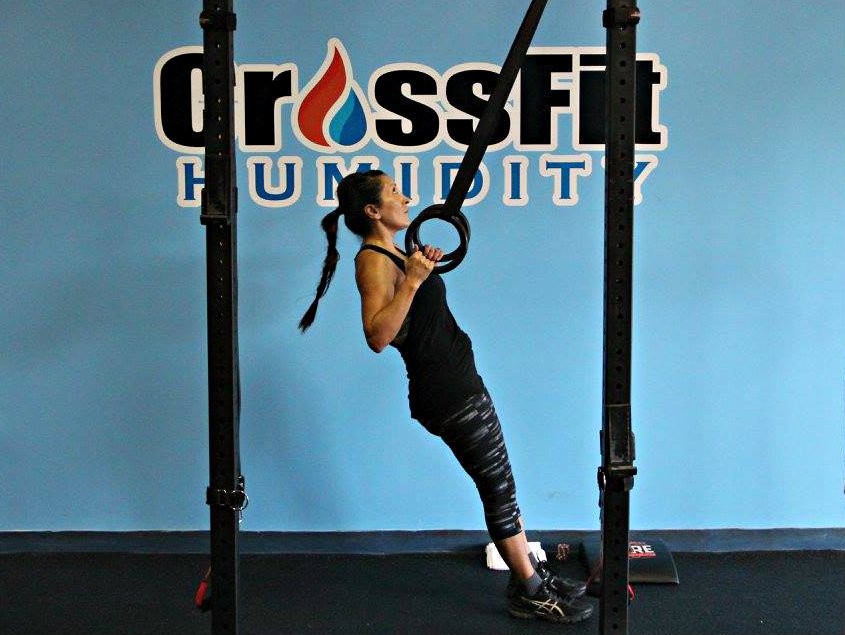 What makes them different than other CrossFit gyms? “We program for a reason,” Korey said.

Their team gets each person’s detailed goals and build W.O.D.s based on their goals. For example, if someone’s goal is to be able to do two pull-ups in 2 months, then they’ll create programs based on what that person is capable of. This isn’t just a get in, get out facility. Korey and Danielle long with trainers Chelsea Gratton, Ashley Shea-Sutton and Nathan Nowell all care about where you want to get to and they are driven to help you get there.

Chelsea Gratton started training Crossfit in July of 2013. Within those years, Crossfit became a huge passion and a new lifestyle for her. Within her first six months of training, she lost over 40 pounds and had already placed third in her very first Crossfit competition. Chelsea has participated in The Crossfit Open each year she has been a part of the Crossfit community. Her second year she placed 300th out of 9,494 participants in the South East Region. Chelsea thoroughly enjoys the comradery and competitiveness of the Crossfit world and can’t wait to pass it on to future Crossfitters. Chelsea has lived in Beaufort, SC for over 18 years and is employed at Beaufort Memorial Hospital.

Nate Nowell is originally from Anderson, South Carolina. While serving in the Navy as a Corpsman, he found a passion for pushing himself, both mentally and physically. He became a Command Fitness Leader during his time in the military, working with other service members who did not meet the military’s physically demanding standards, from a fitness and nutrition standpoint. While in the Navy, Nate found CrossFit and was instantly hooked. He completed his Level 1 certification in 2015 and has been coaching ever since. He also competes in CrossFit and Olympic weightlifting competitions. Nate is a nurse in the Emergency Room at Beaufort Memorial Hospital and is truly invested in the well being of both his patients and his clients.

Ashley Shea-Sutton is originally from Salem, Ohio where she grew up playing multiple sports. After high school, Ashley took her athletic career to the collegiate level, where she was a member of the Mount Union Women’s Soccer Team. She graduated in 2009 with a Bachelors Degree in Education and migrated to the Low Country when she accepted a job as a Special Education Teacher. Ashley found Crossfit in 2012 when she began to get bored with her daily running regiment. She has been competitively training for the last 2 years and now holds her Crossfit Level 1 Training Certificate. Her 8 years of teaching experience helping individuals succeed in the classroom and her passion for Crossfit made it an easy decision to become a coach, where she can continue to help people achieve their fitness goals.

If you’re still a little nervous, check out their free trial class on Saturdays. They offer month-to- month members. “We don’t want to lock people into contracts. We want members that want to be here.”

Find more about the new CrossFit Humidity by visiting CrossFitHumidity.com 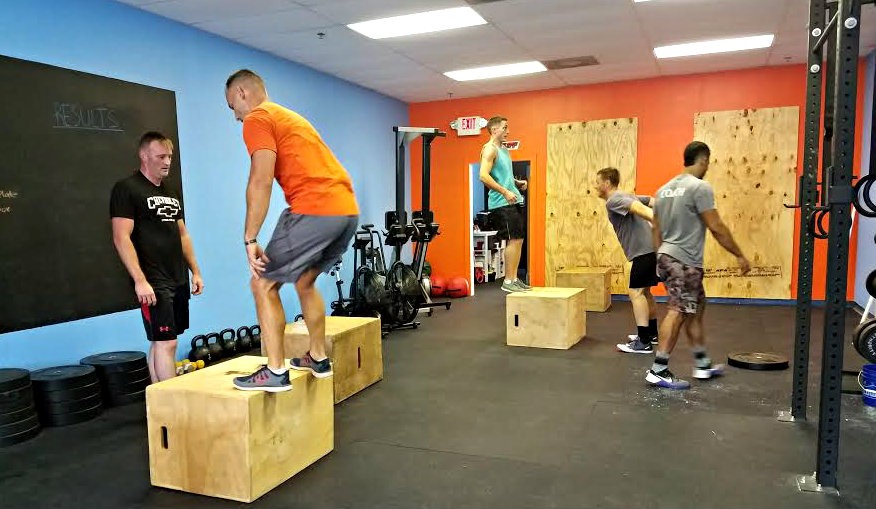 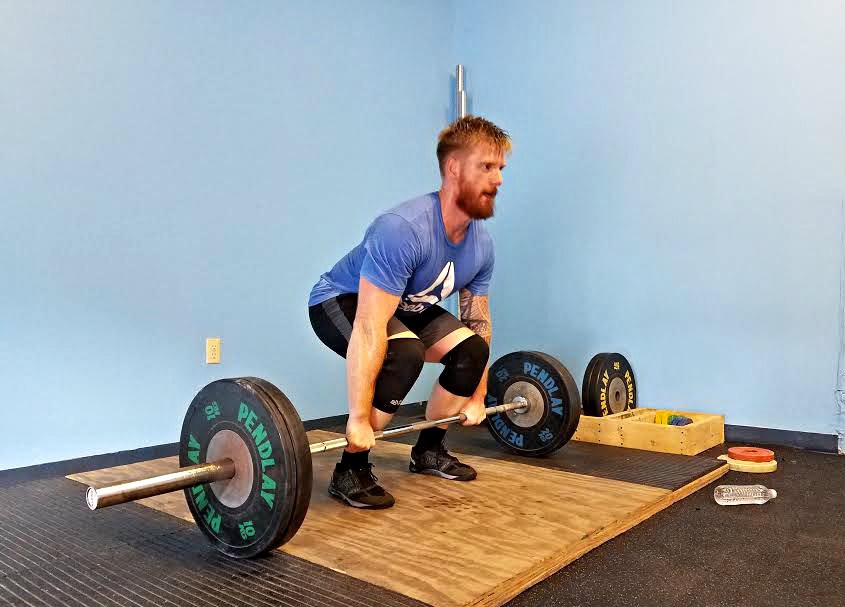 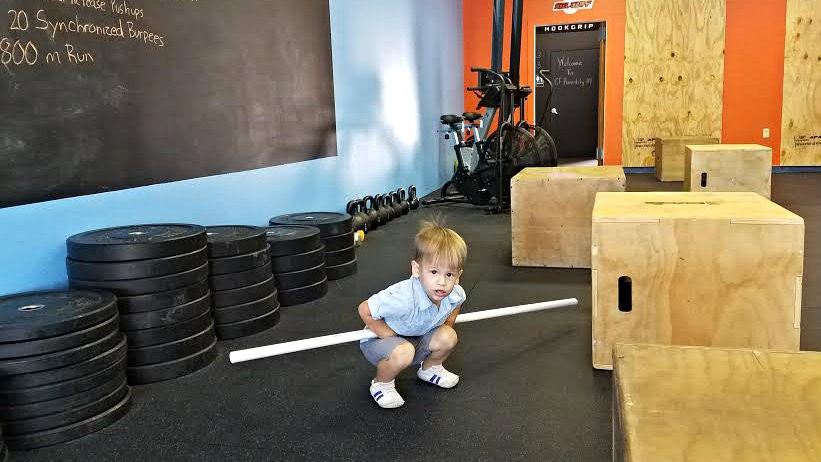 Amber is the owner of GoFlex Training, an in-home personal training service here in Beaufort.  She’s a nationally accredited personal trainer through NASM and ACE.  She specializes in training the 50+ crowd but loves training with all ages and abilities.  Check out  Amber and Go Flex Training on Facebook here.