Preserving the past with Beaufort's JS Doig Restoration

At 31 years old, sporting a “Keep Calm and Restore On” T shirt, New Jersey born and Connecticut raised John Doig does not look like someone one would peg as an expert in the restoration and conservation of fine period antique furniture and decorative art. Nothing could be further from the truth. The recently rejuvenated “Keep Calm” slogan on his shirt, he explains, comes from a motivational poster made by the British in 1939, in order to raise the morale of the British public in the aftermath of widely predicted mass German air attacks.

John Doig has been a part of the antique world since birth. His parents, Karen & John “Sandy” Doig, are active antique dealers and enthusiastic collectors. Doig grew up in an 18th century farmhouse surrounded by the furniture for which he would find a great passion early on. At age 8, he could be found attending auctions and “picking” throughout New England with his father. Soon he found his way into the family’s small restoration shop, and when he was old enough to start learning the trade, it was clear to many that he was a born natural.

“It was funny,” he says, “seeing the looks on some of these guys’ faces when a 13 year old kid is explaining to them why their 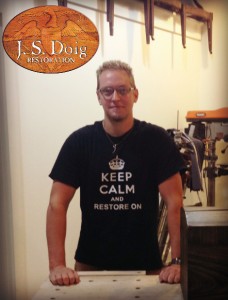 “American” card table is in fact from England, and that the supposedly white pine secondary wood is actually English spruce.” He pauses, then laughs, “wow, looking back I’m surprised I survived!”

After completing a degree in History from the University of Connecticut, Doig felt the desire to take his passion to the next level. Upon several recommendations, he landed an apprenticeship at a well-regarded shop in Savannah, Georgia. Instead of enjoying his summer after graduation with his college buddies, Doig moved himself down to Savannah, GA to continue perfecting his trade. There, he began an extensive apprenticeship working closely under a master of period reproductions and restorations, as well as an expert in conservation.

“I couldn’t believe the opportunity I was being given. While all my friends rented a summer cottage for one last hurrah, my car was packed and I was on my way south literally a week after receiving my diploma.”

Eventually Doig combined the skills he had learned and practiced, and decided it was time to open his own studio back in Connecticut, to continue working in the antique world and rejoin his family. 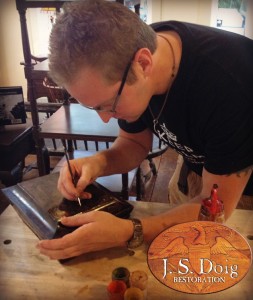 In the fall of 2005, John Stanley Doig set up shop in Litchfield, Connecticut, and founded JS Doig Restoration. Here he continued to learn and go forward, pushing the boundaries for what was could be achieved in his field. He has spent the last ten years in Litchfield, working hand in hand with many well-known experts in the antique & fine arts world, including the 2013 ADA’s Award of Merit recipient, Peter Tillou, as well as the Keno brothers, best known for their work with the Antiques Road Show. Along with some of the country’s top dealers and collectors, his clients have also included notable celebrities, actors and musicians.

“The many dealers, collectors, and experts in this crazy (affectionately stated) world of antiques became my second family”, Doig explains, “every chance I got to work with them afforded me the opportunity to continue learning and growing.”

Besides being a dedicated collector of fine antiques, Doig also has a passion for aviation. A certified private pilot, he has been flying since age 13. As if flying planes wasn’t enough, Doig has also enjoyed jumping out of them, having spent many years and logging over 500 jumps as a licensed skydiver. When he cannot be found in his shop, chances are he’s taking to the skies at the nearest airport.

“What can I say,” Doig says, “I don’t really consider myself an adrenaline junkie, I just love being in the sky. I think I must have been a bird in a previous life!”

After 10 years of being back in Connecticut, Doig could never silence the call of the Lowcountry, and he and his fiancé Carissa Lozinski made the decision to head back down south.

“I brought her here once, and she was hooked. We must have come back here half a dozen times since we met three years ago. We both knew this was the place we wanted to grow old together. I even proposed to her here in Beaufort… on the steps of a Historic landmark, of course.”

After a year of planning and transition, John Doig has opened JS Doig Restoration, his restoration and conservation studio, in the Habersham Marketplace in Beaufort, SC. The new studio has a show room in the front, and houses his entire workspace on site in the back.

JS Doig Restoration’s goal is to provide affordable, complete restoration and conservation from start to finish, and anything in between. Whether it’s a 40 year old chest of drawers, or an extremely rare 18th century tea table, they can determine the best course of action to give you the best results possible while staying within your personal budget. Doig prides himself on being able to combine the best traditional craftsmanship with the most modern technological advances in the field.

“I’m really excited to be living back in the Lowcountry, and to be able to bring the business with me”, he said. “We have a lot of wonderful things planned. I want to share my love of this unique world with anyone who is interested.”

JS Doig Restoration also offers a complete array of modern refinishing and repair services for decorators, designers, and those who are

looking to spruce up, repair, enhance, or bring a new look to their modern furniture. Working closely within client specifications, John can re-purpose, bring new life into, or create an entirely modern and new look to that bland piece in the basement collecting dust for a fraction of the cost of replacing it.

When asked about the “age” question, Doig laughed:  “I do get questions about my age a lot…I get it,” he says, “I’m very young for someone in my position.” After they have worked with him however, he says with a smile, “It never comes up again”

Take a trip into the Habersham Marketplace sometime soon, and check out the new location of JS Doig Restoration, or visit their website, www.jsdoigrestoration.com. 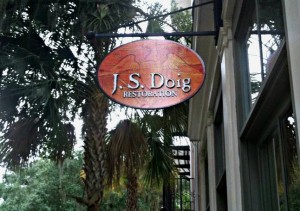