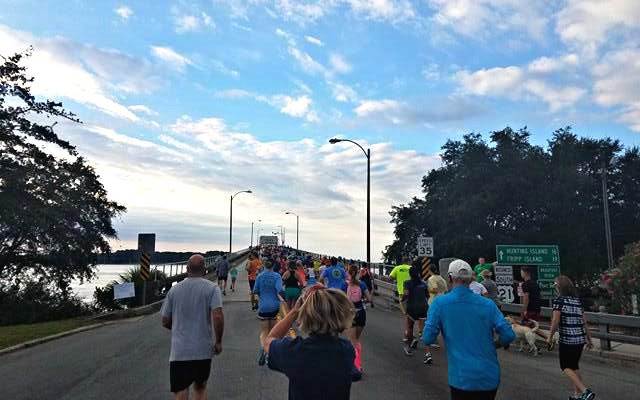 “That day, for no particular reason, I decided to go for a little run.” – Forrest

By Amber Bonem | At 8am, runners of all ages, abilities, and backgrounds came together to run 3.1 miles through downtown Beaufort and over the iconic Richard V. Wood’s Memorial Bridge that Forrest Gump crossed over back in 1994. Before the race started, Fauxest Gump (Played by Paul Dengler) gave the crowd an inspirational speech about his own run, “I had run for 3 years, 2 months, 14 days, and 16 hours…”

Then the horn blew and off we went.

The masses made their way down Bay Street, passing cheering spectators. Everyone turned down the famous bridge where there was a film crew at the top filming everyone as they made their way over. Circling overhead was a helicopter filming as everyone crossed over. Along the run you’d see people running with dogs, strollers, and in Forrest Gump costumes, which made the run an amazing experience. There was an older gentleman along Meridian Road who held his hand out giving high fives to everyone and cheering them on. He was all smiles and a major motivator! Once everyone reached the turn-around point on Meridian, they made their way back to the bridge and back through downtown.

The finish line was a welcome sight and Fauxest Gump was on the edge giving high fives as runners came in.

“The best thing about visiting the President is the food! Now, since it was all free, and I wasn’t hungry but thirsty, I must’ve drank me fifteen Dr. Peppers.” – Forrest 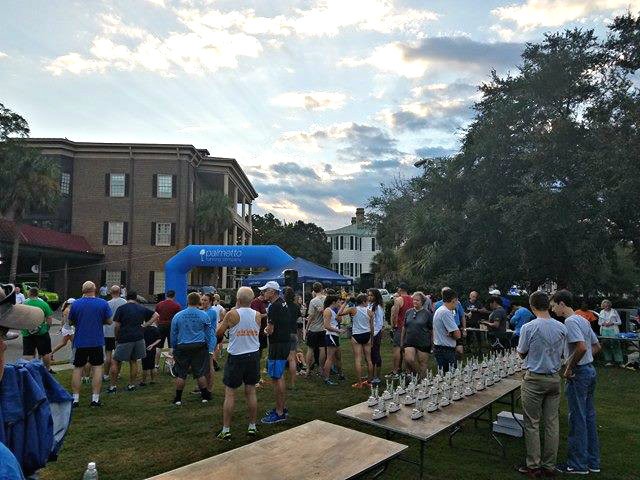 After the race, participants were given a well-deserved Michelob Ultra and had the option on several snacks options such as waffles and sandwiches. If you were in the mood for a sweet treat, you could grab chocolate from The Chocolate Tree.  Fauxest Gump wandered the crowd and if you wanted, you could get a picture with him.

After everyone refueled, they headed off to participate in the Shrimp Festival, with many of Beaufort’s best restaurants tried to win bragging rights for creating their best shrimp dishes.  Beyond the amazing smelling food from places like Southern Graces and Emily’s, there were several craft vendors to check out. Downtown was packed with people, enjoying the food, the view and the feeling of community that is unique to our area.

Palmetto Running Company did an amazing job on yet another hugely successful race. It is great to see so many fellow Beaufortonians support local businesses and each other. It’s one of the many things that makes Beaufort so unique. 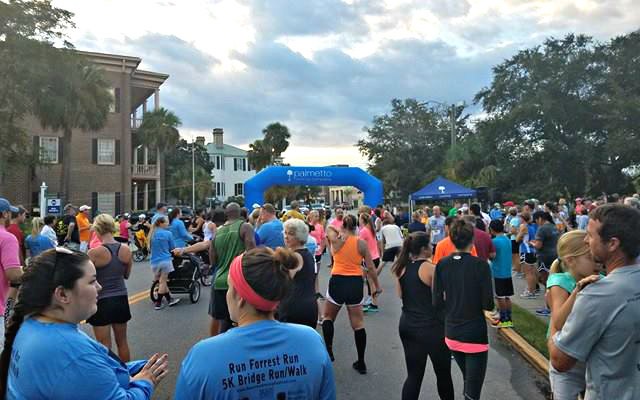 A contributor to ESPB, Amber is the owner of GoFlex Training, an in-home personal training service here in Beaufort.  She’s a nationally accredited personal trainer through NASM and ACE.  She specializes in training the 50+ crowd but loves training with all ages and abilities.  She lives in Beaufort with her husband Jory and three dogs, Lincoln, Penny and Arya. Growing up in the Marine Corps allowed her to travel all over the country but Beaufort is the home she chooses to be happy and healthy in. Check her out on Facebook here.