Close your eyes and picture a beach.

Think of the soft sand as it squishes your toes, the soft breeze as it sweeps across your face, and when you walk towards the water, the calm tide gently touches your feet. When you look out into the sea-green water, think about all of the creatures that live in those waters.

The ocean is the home to millions of sea turtles, however, for a turtle to make it to maturity, it takes a great deal of strength, perseverance and luck. Every morning, volunteers walk our beaches, working to increase their chance at survival by checking nests and keeping an eye out for turtle tracks, laid nests, turtles, and predators that they may come across. With every turtle that comes ashore, nest that is laid and hatchling that breaks out of its soft shell, only one in 1000 sea turtles makes it to maturity.

These endearing creatures are endangered, and in an instant, they could be gone, but there are ways to help protect them this summer.

For beaches like Harbor, Fripp and Hunting Island, it isn’t unusual for a loggerhead sea turtle to lay nest with 50 to 180 eggs in one 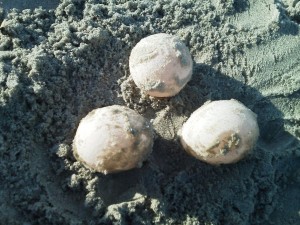 clutch, however, if they are lucky, one egg out of each clutch will survive to maturity. Because the eggs in each clutch take between 45 and 75 days to hatch, their chances in either being preyed upon or destroyed by climate conditions increases. Three of the several causes that endanger sea turtles are predators, climate change and humans.

Sea turtles have several predators on and off shore. While they are out at sea, predators mostly consist of large sharks, but while they’re on onshore, Harbor, Hunting and Fripp Island has experienced predation from predators like raccoons, ghost crabs, ants and foxes. For the past few summers, foxes have been a problem for some of the local islands. At night, when the female turtles come ashore, the foxes will either see them nesting and harass the girls or wait for them to leave, so the foxes can smell out the freshly nested area. For some islands like Harbor, some mornings it’s not unusual to find eggs that have been eaten after they are laid or decapitated baby sea turtles on the beach after they have hatched. Because of this, some nests do not have any survivors.

Climate change poses as a unique threat to sea turtles because it is unpredictable. Temperature, sea levels and coastal storms attribute to the deaths of several sea turtles each year. When a nest is first discovered, patrolers have to decide whether or not the nest is too close to the tide line because, if it is, the water can drown the eggs during high-tide.

In 1995, Watkinson and his colleagues used Hendrickson’s research and found that “[turtles] nest on a variety of beach types, which may be affected in different ways by sea-level rise. Sea turtles nest on exposed marine beaches in deep, relatively loose sand above high-tide level.” They also discovered that turtles could have beach preferences that are based on specific characteristics: 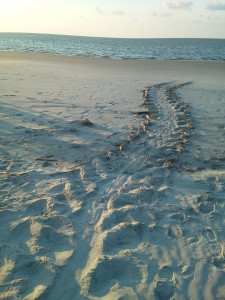 “Characteristics [that could] include a number of physical features: beach length, width, height, slope, orientation, and vegetation.” During nesting season, it is imperative that patrolers move the nests away from the high-tide line because it could kill an entire nest — that is 50 to 180 eggs lost, and any turtle that is lost before it has a chance to hatch is one less turtle that as a chance of maturing. Additionally, climate change increases the severity of coastal storms. With stronger coastal storms, the sea level rises, destroying sea turtle nesting sites. A couple of summers ago, several nests were wiped clean of eggs because of coastal storms. The eggs that could have survived to maturity did not, and the eggs that died are added to the thousand that do not survive.

After a nest is laid and an egg incubates in the sand, the temperature determines the sex of the turtle. According to current research, the ‘pivotal’ temperature is 84.6 degrees Fahrenheit, nests in warmer sand give rise mostly to females while nests in cooler sand yield mostly males. Although the temperature determines the sex of the turtle, it is known to affect their survival. The water can become too cold for the turtles to come ashore or leave the beach, and because of the cold temperatures, female adult turtles cannot lie during nesting season, so the turtles that already occupy the beach (i.e. adult, juvenile, and baby turtles) cannot leave. Other places along the east coast, like Florida and South Carolina, if the temperature is too hot, can cook the sea turtle eggs while they are still in the nest. Literally. For the past few summers, as patrolers were releasing nests, they have found cooked sea turtle eggs inside of nests because the sizzling temperatures. Unfortunately, though, there aren’t any tactics for controlling Mother Nature, so as the summers get hotter or colder, so do the eggs.

Lastly, we contribute to the harm of these adorable creatures. The noise and activity people make on the beach can disturb female turtles, preventing them from nesting. When people leave trash on the beach, sea turtles can ingest it, which can lead to injury or death. For example, leather back sea turtles are most susceptible to ingesting plastic because they mistake it for jellyfish. Moreover, almost all sea turtles are nocturnal nesters, and for a turtle that hasn’t come ashore to nest yet, a brightly lit beach may signify daylight and inhibit nesting. Artificial lighting on beaches may misrepresent the time of day to turtles attempting to nest, and hatchlings can become disoriented by city and streetlights when they are heading out to sea, which can also make them more likely to be spotted by predators or getting crushed by cars.

So, what can you do?

First, turn off your lights. The Department of Natural Resources in their 2011 report says, “Do not shine lights on a sea turtle or take flash photography; turn out all exterior lights (flood and deck) visible from the beach, dusk to dawn, from May through October; and close blinds and drapes on windows to shield interior lights that can be seen from the beach or ocean.” Artificial lighting can 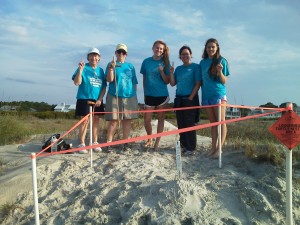 discourage adult females from nesting, and the hatchlings emerging from nests can get distracted and not go to sea. Also, the Defense of Wildlife stated in their 2011 article, “Sea Turtle Facts and Videos,” that various “sea turtle hatchlings use light and reflections from the moon to find their way to the water at night. Artificial lighting confuses the hatchlings and causes them to head inland instead of out to sea —putting them in dangerous situations, which can lead to death.” Documentation has shown that sea turtles that have come into contact with artificial lighting have crawled for hours in circuitous paths or direct paths from the ocean. Circuitous paths (disorientation) and direct paths from the ocean and towards the artificial lighting (misorientation) decrease their chances in making it out to sea. Thousands of these hatchlings die throughout the summer from exhaustion, encounters with predators, entanglement in dune vegetation, dehydration after sunrise or from cars as they drive along coastal roadways.

So, the next time you’re on the beach, please turn off your lights because you could save a turtles life. If you run into a stranded turtle while on the beach, call the security gate, and they’ll call someone who can help with the problem.

Also, everyone at some point in his or her life has either built a sandcastle or dug a large hole in the sand. They want to leave their masterpiece on the beach for others to see or don’t bother to fill in or destroy them because they simply forget out it. But did you know holes and sandcastles could trap sea turtles? When a turtle comes in for nesting, large holes or sandcastles can trap the turtles, making them distraught. For example, there have been cases where turtles have been trapped in holes, and, when they get out of them, the turtles go back to sea and don’t nest. It is similar for the hatchlings as well. The hatchlings can get trapped in holes and become more susceptible to predators and/or exhaustion.

As a final request, clean up your trash. The Department of Natural Resources says, “[Sea] turtles can become tangled in plastic and trash both on the shore and in the water. Discarded items such as fishing lines, balloons and plastic bags may also be confused for food and eaten by sea turtles, often resulting in injury or death.” It isn’t uncommon for sea turtles to eat plastic as a misinterpretation for jellyfish. They can also become entangled in sea netting. In the 1980s, approximately 33 percent of sea turtle’s mortalities were attributed to sea netting, but with caution and self-awareness, this large percentage can be decreased. 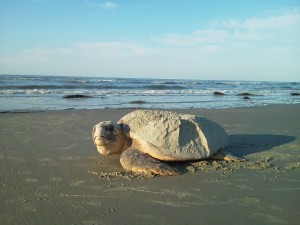 Sea turtles are one of the most endangered species on the Red List of Threatened Species.

They are a precious gift of nature, for they not only save our food chain, but they help put smiles on our faces while watching movies like Finding Nemo or watching them hatch from their cream-colored shells for the first time.

Every time you go to the beach and you see a piece of trash, pick it or turn off your lights at night because you could save a little Squirt or Crush. They are living creatures that are an integral part of the ecosystem and biodiversity of the oceans, and, with your awareness, you can help during the summer.

You can increase their chance of survival by saving one turtle at a time.