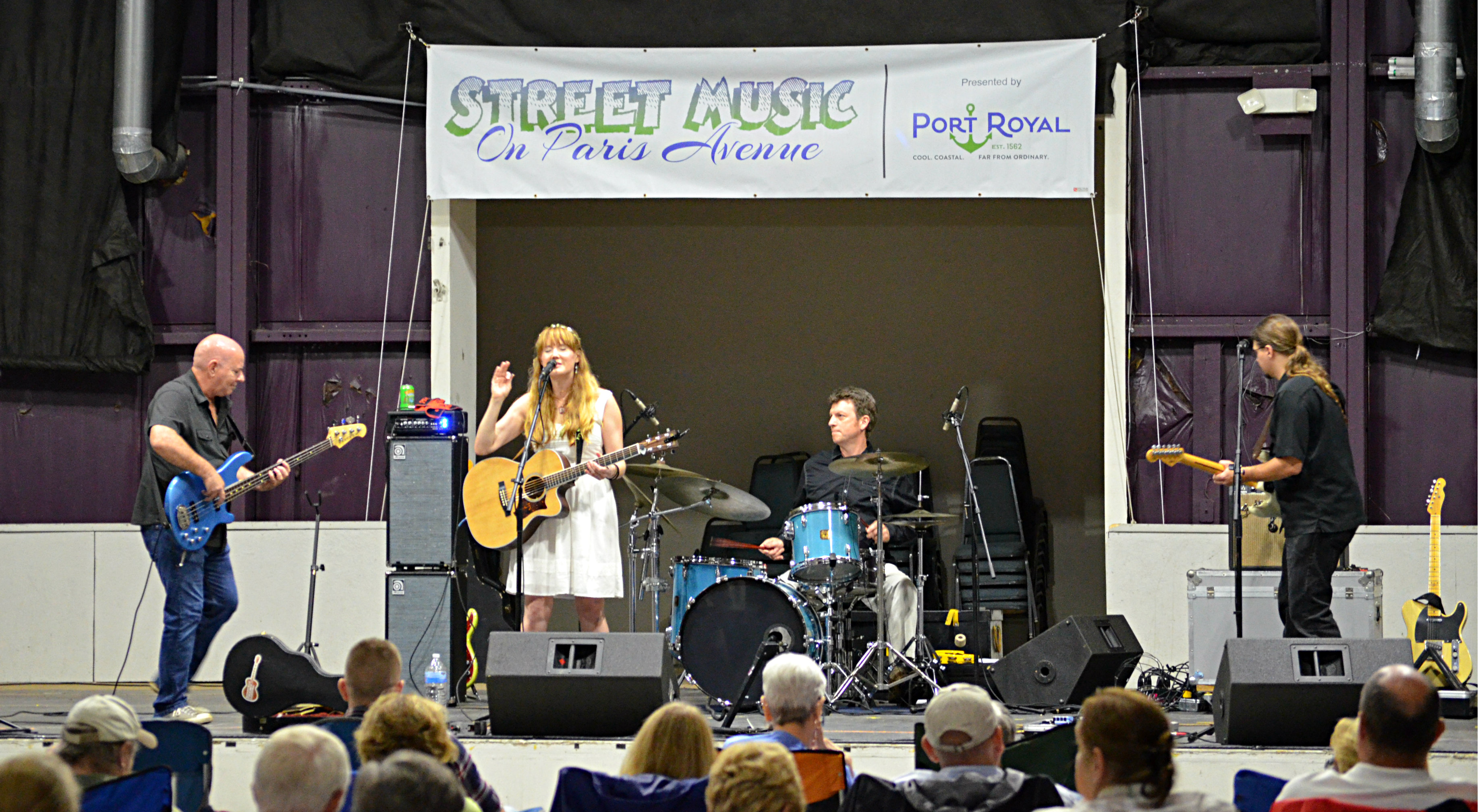 If you are not attending Street Music on Paris Avenue in Port Royal you are really depriving yourself of one of the finer treats Beaufort has to offer during the dog days of summer. Presented by the Town of Port Royal, Street Music is a series of eight concerts that are held outside (weather permitting) and are totally FREE. Yes, you read that right. Free concerts. The series brings nationally known bands to our little corner of the world and we get to enjoy an eclectic selection of live music that runs the gamut from jazz standards to progressive country.

We were treated Saturday evening to Angela Easterling and the Beguilers, which due to weather not permitting, was held inside The Shed on Paris Avenue in Port Royal. It would be easy to label Angela Easterling “country” but her hard driving rock tinged band combined with her original songs, puts her in her own category, which could be described as “outlaw country” for lack of a better term, but you get the idea.

Any woman who can rock covers of Johnny Cash, Hank Williams and Neil Young gets to call herself whatever she wants. 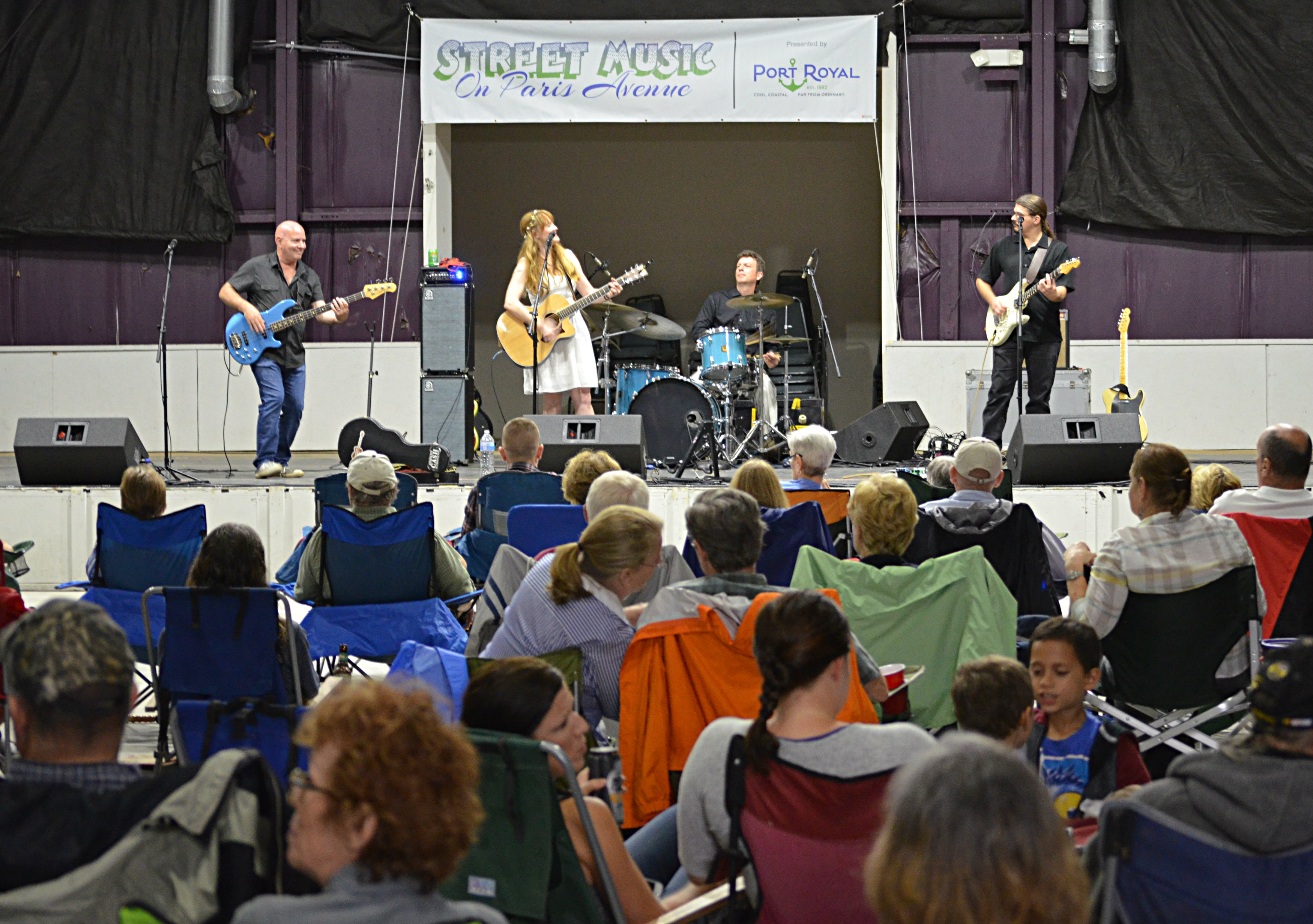 From Greer, South Carolina, Angela told the audience that her family has been farmers on the same land since 1781 and that her three month old son is the eighth generation to be raised on the family’s farmland. She sang two original songs about the farm, “Black Top Road”, about her family’s struggles to keep their land, and “Manifest Destiny”, which was about the Native Americans who were on the land first. Both songs were winners and then she knocked it out of the park with another original song she introduced as “a cheerful little tune” entitled “Arkansas Murder Ballad”. Amazingly it was upbeat and cheerful!

What makes Street Music so cool isn’t just the great music; it is the friendly feeling of community you get just from being there. It is a BYOB (bottle), BYOC (chair), BYOS (snack) and for some a BYOD (dog) event and somehow that is what makes it work so well.

A friend described it as “tailgating for grownups” which is an apt description. From pink hair to silver, from babies to seniors, all are welcome and all are here. I have even seen Clemson chairs snugged up to Gamecock chairs! No strangers here, everyone is either an old chum or a friend you haven’t yet met.

The concerts take place every other Saturday at 6:30pm so grab a chair, throw a few cold drinks in a cooler, and settle yourself in for the next six shows. We’ll see you there! 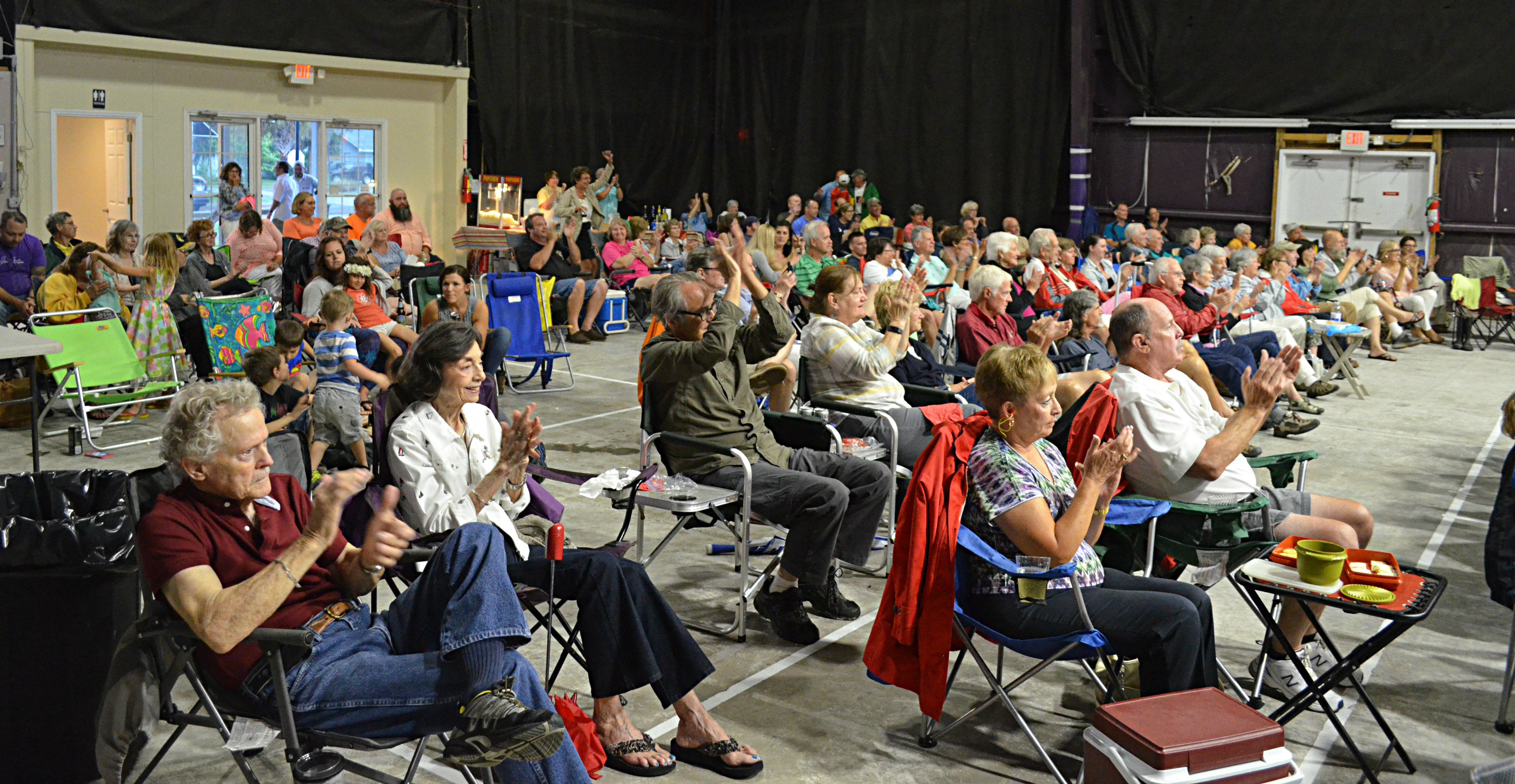 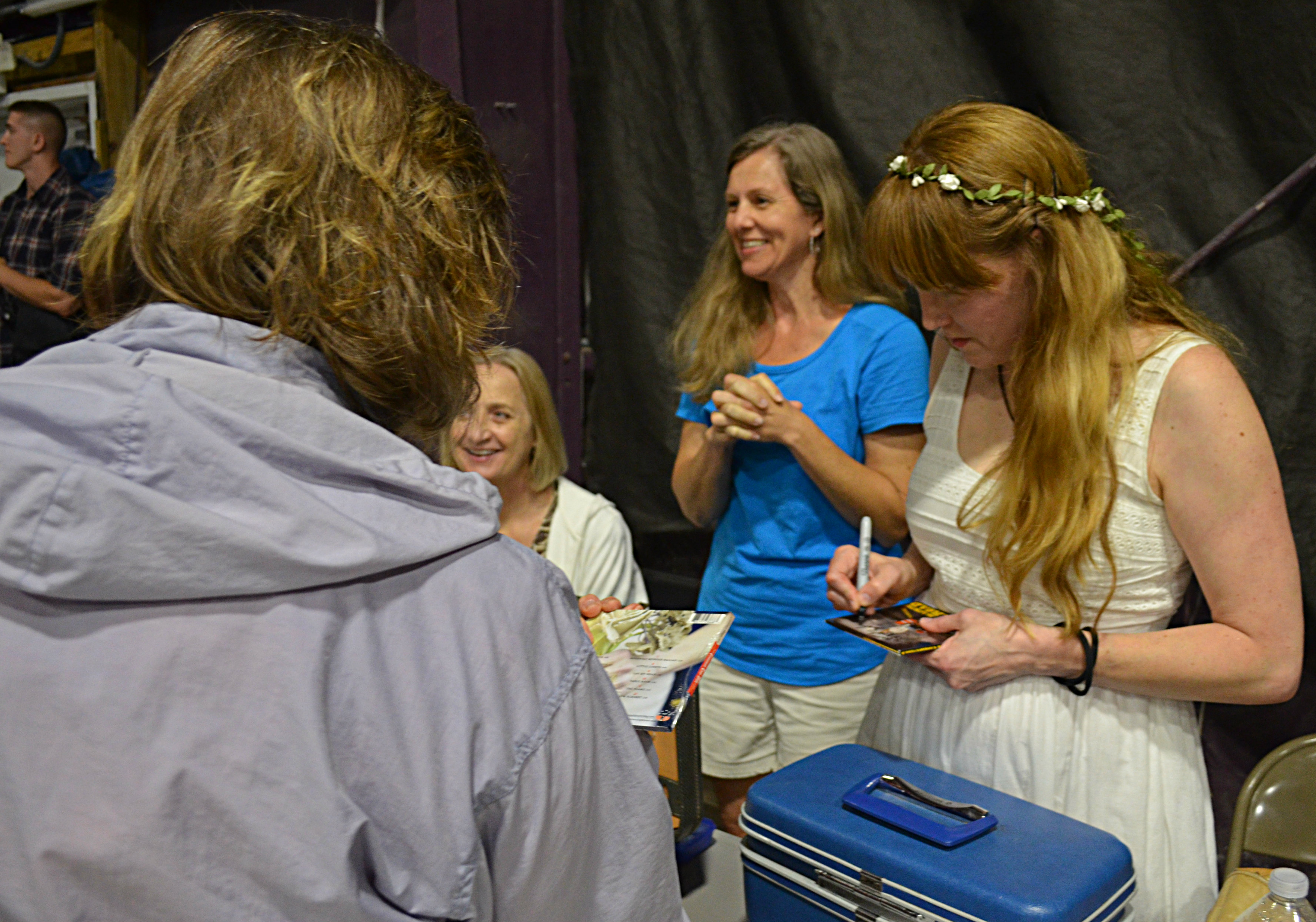 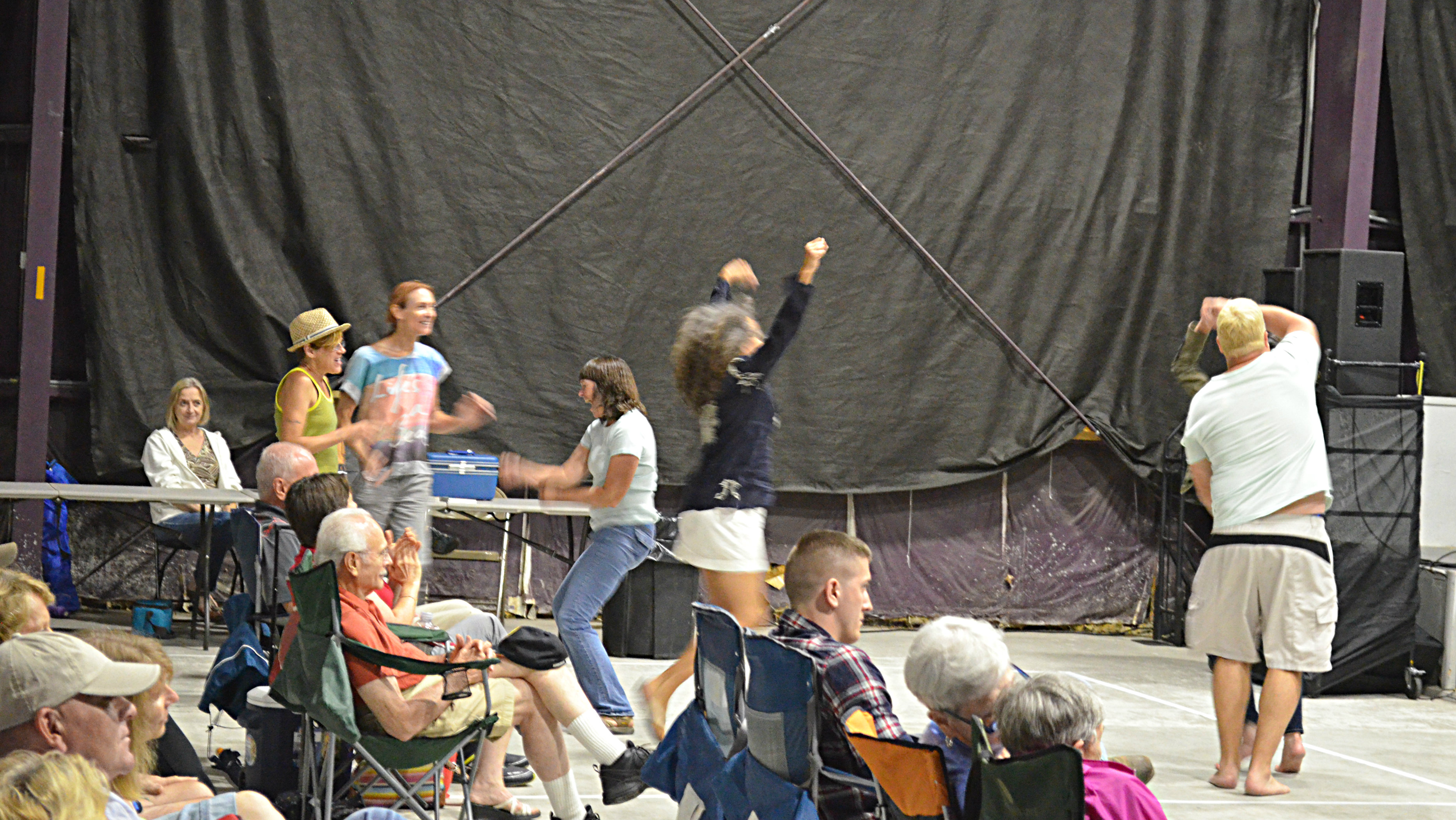 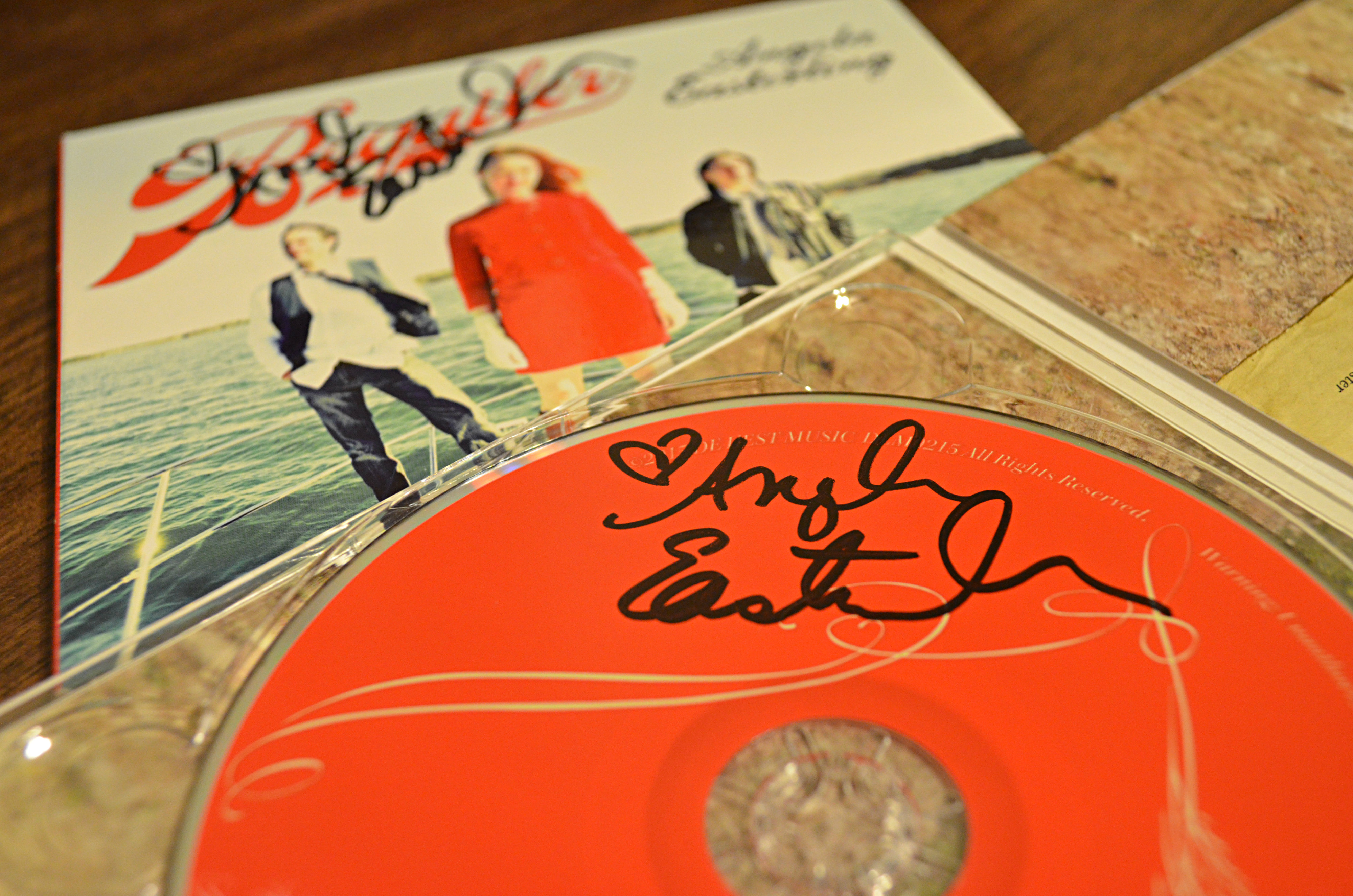