The renowned bluesman Guy Davis will perform a public concert on Saturday, September 29, following his music residency with students at Beaufort Academy.  Davis’ appearance in Beaufort is just the latest in his astounding career of music, acting, and composing.  The concert is presented by ARTworks and funded by the National Endowment for the Arts.

Davis is the son of actors Ruby Dee and Ossie Davis. He made his Broadway musical debut in 1991 in the Zora Neale Hurston/Langston Hughes collaboration “Mulebone”, which featured the music of Taj Mahal. Davis also arranged, performed and co-wrote the music for Emmy award winning film “To Be a Man”. In the fall of 1995, his music was used in the national PBS series, “The American Promise”, and in 2003 he toured with Jethro Tull at the invitation of Ian Anderson. His discography ranges from his first album “Dreams about Life” in 1978, all the way through “The Adventures of Fishy Waters: In Bed with the Blues” in 2012.

As an educator Guy has performed residency programs for the Lincoln Center Institute, the Kennedy Center, the State Theatre in New Jersey, and works with “Young Audiences of NJ”, doing classroom workshops and assembly programs all across the country, and in Canada for elementary, high school, and college students.

Throughout his career, Davis has dedicated himself to reviving the traditions of acoustic blues and bringing them to as many ears as possible through the material of the great blues masters, African American stories, and his own original songs, stories and performance pieces.  He has played with notable names like Steve Earle, Warren Haynes, and has played all over the world.

ARTworks is the community arts center of Beaufort, the coolest arts council in the Carolinas, and applies the many creative tools of The Arts to strengthen artists, and enrich audiences, collectors, and visitors through high quality arts experiences and arts education programs 365 days a year. ARTworks is located at 2127 Boundary Street, in Beaufort Town Center, SC 29902. 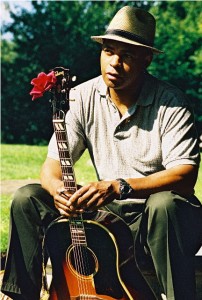