On October 10, Shakespeare Rep, Beaufort’s professional classical theatre company, launches its Season of Wonders with the quirky contemporary comedy Almost, Maine at the USCB Center for the Arts.Almost, Maine is a study in contrasts: alternately funny and heart – breaking, it is about simple folks grappling with complicated matters of the heart.

Following a successful off – Broadway run in 2006, the play has quietly advanced to a position as one of the most produced plays in America; globally, it has been produced by over 2000 theatre companies and translated into 11 languages.

So – why have most people never heard of it?

Director Debra Charlton explains: “Almost, Maine has acquired an almost cult status among theatre audiences. Word of mouth about this wonderful and slightly odd little play has spread from theatre to theatre across the US. It has literally crept up on us to become a new standard in the modern American repertoire.”

Almost, Maine is an unlikely hit – it that evoked such diverse comparisons as The Twilight Zone, Love, Actually and Thornton Wilder’s Americana masterpiece Our Town. Comprised of 9 interrelated story lines, the characters have struck a chord in the hearts of audiences with their essential decency, vulnerability and kindness.

Written by John Cariani, a Tony nominated performer, it is an actor – centered play. The Shakespeare Rep cast brings together some of the Lowcountry’s finest acting talent, including 4 real – life couples: Terri and Chad Hsu, Elaine and Jason Lake, Michael Weaver and Christine Grefe, and Libby Ricardo and George Pate. Add to the mixture Kate Dzvonik, an International student from Kazakhstan who is completing a professional acting internship with the Company as part of her final year in the MFA program at USC; Erin Dailey, a Juilliard alum, whom you might have seen as Lady Macbeth in Shakespeare Rep’s premiere production of “ Macbeth ” last spring; Pat Morgan, a staple character actor in the Bluffton theatre scene, and Savannah native Jordan Jones, a successful classical performer who recently completed a run as Oberon in “ A Midsummer Night’s Dream ” for Shakespeare & Co, one of America’s premiere Shakespearean theatres.

The production is directed by Debra Charlton, founder of Shakespeare Rep and an acclaimed Shakespearean director and teacher. Jason Lake (Macbeth, Grease) designs the set and lights. The production will run October 10th through 12th at the USCB Center for the Arts. Showtimes are 7:30 on Friday and Saturday, 3:00 on Sunday. 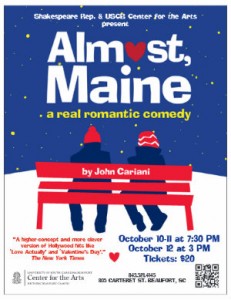