This Saturday, StreetMusic on Paris Avenue closes out the first half of its 2013 season at 630pm with Angela Easterling and the Beguilers. Bring your chairs, coolers and dancing shoes because Angela ‘s brand of folk music is widely known and wildly popular throughout the US.

Angela Easterling was raised in the South Carolina foothills of the Blue Ridge Mountains. Much of her childhood was spent on the Greer, SC farm that has been in her family since 1791, seven generations. She embraced her heritage in a big way as a writer and an artist on 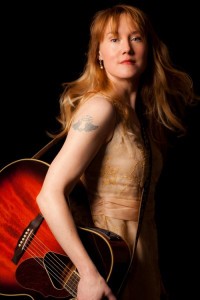 her debut album, “Earning Her Wings”, chosen as “Americana Pick of the Year” by Smart Choice Music.

Her second album, “BlackTop Road”, produced by Will Kimbrough, was released in July ’09, landing in the top 5 for adds to the Americana radio charts and debuting on the Americana top 40 chart in September, where it remained for 7 weeks.

“Angela Easterling has a golden glowing voice and she writes observant songs about contemporary life. She can weave urban sprawl and cultural shifts into songs as gingerly as love and relationships.” – Craig Havighurst, Music City Roots

She was selected for an official Americana Convention Showcase and also named a 2009 & 2010 Kerrville New Folk Finalist and a 2011 Telluride Troubadour.

Roger McGuinn, founder of the Byrds, called her “a bright shining star on the horizon!” and went on to say, “Her gift is so special. Her CD BlackTop Road brought me back to the time the Byrds recorded “Sweetheart of the Rodeo” – tradition meets youthful exuberance.”

This FREE concert series is sponsored by ARTworks and the Town of Port Royal.  We would like to thank both the Town, and ARTworks for putting on this free series for the community.  If you haven’t been to it yet, this Saturday’s show is a great way to start.