By Cindy Reid | Beaufort Town Center was the place to be on Saturday afternoon as hundreds of people turned out to meet and greet former USC Gamecock star and now NFL Detroit Lion rookie Devin Taylor. Unassuming and gracious, Taylor posed for photos, signed autographs and spoke to all his friends and fans, often bending way down from his 6 foot 8 inch height to chat with the youngest ones who barely reached his knees. 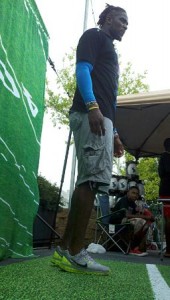 for all the support Beaufort has shown to Taylor over the course of his college football career. His mother Sylvia Cuyler said, “We are really grateful to have the opportunity to thank all the people who supported Devin while he was at USC. “ His sister Demeka Taylor said, “Devin has always wanted to give back to the community and we wanted to have a fun day, especially for the kids, that’s why we had free hot dogs and a free jumpee house for the children.”

Nikki Williams, manning a booth from the retail store “Sports Nutz”, said ”We are all so proud of Beaufort’s finest, Candice and Devin, and I think Devin is a very remarkable young man who represents hard work and great parenting.” Imani Miller, also from “Sports Nutz”, said “I think it’s good for the community, and seeing everyone come together is wonderful.” 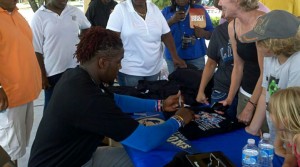 During a break from posing for photos Devin said he enjoyed being in Beaufort and having the chance to give back in any way he could. About the new phase of his football career he said “The biggest change is transitioning from college to pro coaching style, but once you get used to it, it is very simple”. He said he hadn’t had much chance to explore the Motor City but he had toured Ford Field, where the Lions play when they are at home, and said it was “very impressive”.

All afternoon Taylor was busying signing autographs, saying hello to old friends, and obliging all requests for photos. Gracious and unhurried, he had time for everyone, even posing with a tiny baby girl in his arms, to the delight of her parents. Poised on the brink of his professional sports career, but grounded in the principles of hard work and humility, Devin Taylor made it his business to truly show his appreciation to the people of his hometown.

That’s what “Devin Taylor Appreciation Day” was all about.

For dozens of photos of Devin Taylor Day in Beaufort, visit our Photo Gallery. 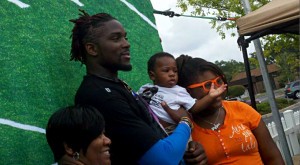 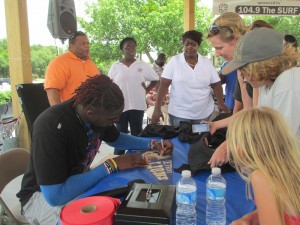 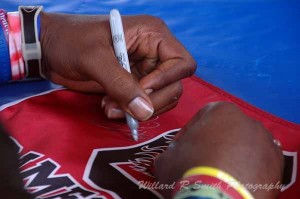