Grab your chairs, your coolers and a few friends this Saturday and head on over to Port Royal for StreetMusic and get ready for some blues. The free concert series continues at 6:30 with a performance by blues artist Mac Arnold.

Mac Arnold is a true blues pioneer.  He must have known at an early age that his music career would read like a “Who’s who” of Blues/R&B Legends.

He’s worked with James Brown and at age 24, came the opportunity of a lifetime to join the Muddy Waters Band and help shape the electric blues sound that inspired the rock and roll movement of the late 60’s and early 70’s. Regular guests of the band included Eric Clapton, Paul Butterfield, Mike Bloomfield, and Elvin Bishop.

Mac moved to Los Angeles and produced Soul Train with his friend Don Cornelius and he even played bass on the Sanford & Son television show when he wasn’t playing bass for Otis Redding and B.B. King. He retired from show business to be an organic farmer.

Mac is back with his own band Plate Full O’ Blues and a “plate full” of CDs, building a new foundation in blues, soul and funk. 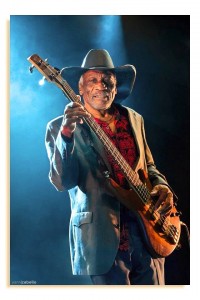