The HabershamMarketplace, as part of its ongoing First Fridays event series and in celebration of the 2012 Olympic Games, will host “Summer Games Galore” on Friday, August 3, 2012, beginning at 4 p.m. The event will feature live entertainment by local favorite, The Brewer Band, an expanded Farmer’s Market complete with local and regional growers, as well as arts, crafts and specialtyfood vendors from 4-9 p.m.

In keeping with the Olympic theme, children’s activities will include various races, games and competitions, complete with a variety of awards and prizes. Marketplace restaurants, including Berto’sTex-Mex Grill, Maggie’s Pub and Piace Pizza will serve guests street side and inside their restaurants.

“Families play a large role in the planning ofour First Fridays events,” said Habersham Marketplace Merchant’s Council President Leslie Pickel. “We thought celebrating the Olympic Games by way of kid friendly competitions would be a fun twist to the event!”

The First Fridays Seriescontinues monthly through October with the Second Annual Rock the Block Back toSchool Rally (September 7) and a Blues and Brews Festival (October 5).
The Habersham Marketplace is located at 13 Market St. in theHabersham Neighborhood, located off of Joe Frazier Road in Beaufort. For moreinformation, visit www.habershammarketplace.com 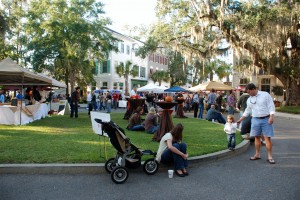