Take a dip in the upcoming annual Beaufort River Swim 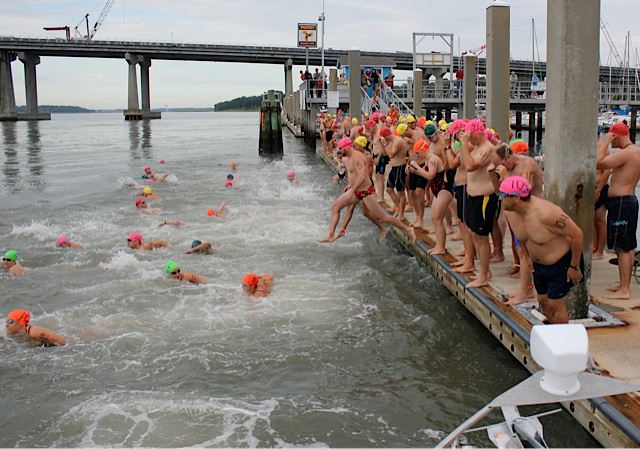 You know that warmer weather is about to hit our part of the Lowcountry when it’s time for the YMCA’s annual Beaufort River Swim.  This year, the 12th Annual swim will be held on Saturday, May 19th, at 830am with check-in at 7. Competitive swimmers, triathletes, high school, college and recreational fitness swimmers from around the region will have a chance to challenge themselves beyond the pool in the a three-mile open water swim beginning at the Port Royal Landing Marina and finishing at the boat ramp at the corner of the Downtown Beaufort Marina, adjacent to Henry C. Chambers Waterfront Park.

The Beaufort River Swim (BRS) is Beaufort County’s only open water swim race dedicated to raising awareness of swimming in the Lowcountry and funds for the YMCA of Beaufort County Learn to Swim program. The Learn to Swim program provides swim lessons to local children and adults who would not otherwise have the means or opportunity to learn to swim. In 2017 alone, the Y taught over 1,500 swim lessons with over half of these being a direct result of scholarship assistance provided by the Learn to Swim Program.

Beaufort County is comprised of over 50% water that includes beaches, rivers, ponds, marshes, and estuaries. “Many people move to our area just for access to water and boating, so it only makes sense to adequately prepare our residents to be safe and confident on the water,” said Lou Bergen, Y Aquatics Director.

According to the Centers for Disease Control and Prevention, fatal drowning is the second-leading cause of death for children ages one to 14 years old. In ethnically diverse communities, the youth drowning rate is two to three times higher than the national average, according to a USA Swimming study. Additionally nearly six out of 10 African American and Hispanic/Latino children are unable to swim, nearly twice as many as their Caucasian counterparts.

“It is absolutely crucial that all kids know how to swim. There is water all around us, even if it’s as small as a bathtub,” added Bergen. “The Y teaches people of all ages and backgrounds that water should be fun, not feared, and this practice not only saves lives, it builds confidence.”

Back in 2006, the Beaufort River Swim started as a way to promote the sport of swimming during the annual Beaufort Water Festival but soon it began to take shape as an event all its own. The YMCA took charge of the event in 2008, and has hosted it every year since. Thanks to proceeds from the BRS, literally thousands of local kids and adults have been able to take swim lessons and learn water safety at the Y.
Also on tap is a 1-Mile ‘Fun Swim’, which will allow those who are new to open water swimming the opportunity to see what it takes to swim a saltwater, tidal river but on a shorter course.
For more information and to register for the annual dip in the Beaufort River, visit the Beaufort River Swim website here.
Previous article
Next article