The girl with a view from above

By Mary Ellen Thompson and Beaufort Lifestyle |  Sometimes when you are watching the night sky, one star appears to sparkle a little more as the evening wears on. Your eyes keep coming back to that spot to see what’s happening. Madeline Aune is one of Beaufort’s stars. She continues to shine brighter, jump higher, and outdo the one person with whom she’s really in competition – herself.

For the past three years, Maddie has distinguished herself in pole vaulting. “I started gymnastics when I was three. By the time I was in sixth grade I had to quit due to injuries. I had broken four bones in my foot and had sustained seven stress fractures. I thought it was the end of the world, but when one door closes…”

The leap from gymnastics to pole vaulting is not as unusual as the casual observer might think. Both sports require a lot of athletic ability, rigorous training, dedication and commitment. How did the transition occur for Maddie? “Pole vaulting found me. It’s challenging and I love a challenge!” Her enthusiasm is catching, “Pole vaulting is so much fun, I really enjoy it.” But on the sobering side, Maddie acknowledges what it takes to be in her position. “I’ve sacrificed a lot to be where I am. In addition to practicing here, I go to Columbia twice a week to train. I do strength workouts three times a week. I watch what I eat, and I make sure to stay fully hydrated and rested.” She’s fully aware of the commitment her family makes to her sport, in terms of time as well as financially.

Maddie is a junior at Beaufort High this year. Merging her athletic schedule with the other aspects of her life requires a bit of juggling. With her trade mark enthusiasm and engaging smile, Maddie pronounces “I’m a normal teenager. I like to be with my friends and go to the beach, the movies, we’re always laughing. They support me so much – that’s what friends are for!” In addition to her friends at home and school, Maddie is part of a bigger group of the 604 girls who pole vault in South Carolina. As in every sport, there are friends and friendly competitors – and those people, who truly understand and share a commitment to the sport, become a sort of family. Maddie says, “People who are in the sport are the ones who understand what we’re going through.”

The very basics of pole vaulting are explained in the engineering publication Illumin: “The vault is a complex, yet seemingly fluid and graceful process that utilizes almost all of the core muscles of the body and requires a large amount of practice and skill. This complex process can be

broken down into four basic steps: the approach, the plant/take-off, the swing-up, and the push-off.” Coach Gibbes McDowell goes on to explain: “In pole vaulting with a fiberglass pole, the athlete seeks to transfer as much of his/her running speed and body weight as possible into the pole as stored kinetic energy as the pole bends. With the right coaching and gymnastic skills, the athlete learns how to translate the release of this stored kinetic energy into maximum vertical energy as the pole uncoils. Speed, power, grace, and raw talent determine how successful athletes utilize this explosion of energy to jump greater heights. The best of the best bring absolute focus, bereft of all else, to each and every vault. To each and all: ‘Go high or go home.’”

In competition, the athletes gets three attempts at each height. Once they achieve that height, they go on to the next. If they don’t make that height in the three jumps, they are out of the competition. Depending upon the number of entrants, a competition can last as long as four to five hours.

Aside from the obvious factor of the time commitment to the sport, what other challenges does Maddie face? “ I’m a perfectionist. I put everything I have into everything I do. All of my coaches have taught me so much about life in general. Gibbes McDowell is my pole vaulting coach at Beaufort High, Herbert Glaze is my track coach, David Kirkwood my gymnastics coach, Shane Miller my strength coach and Rusty Shealy is my coach in Columbia, where my dad drives me twice a week.” She continues, “If I have a bad practice, I have learned to take it as a learning experience because this is also a mental sport. I’m learning good time management skills, I take honors and AP classes, I study a lot. Just like pole vaulting, I put 100% into my studies. I would like to graduate at the top of my class. I’m also in ROTC, the Spanish Honor Society, the Math Club and Interact. When I have the time, I do like to relax with my family – they mean everything to me!”

One can imagine that with Maddie’s drive and exuberance, that the sky is the limit when it comes to her aspirations. “It would be amazing to go to the Olympics! Could I see myself there? Wow – that would be mind blowing!”

With a sense of pragmatism, Maddie is well aware that the whole is the sum of the parts. “Everybody goes through struggles; real athletes will push through when others would quit.” She had many sources of inspiration in addition to her family, friends and coaches, “I’ve met so many girls at the Nationals and seen how they got there and what their experiences have been. I don’t read too much but when I do, I like athletes’ bios; one of my favorites is about Apolo Ohno who is an Olympic speed racer and the most decorated American Winter Olympic athlete of all time. I actually got to meet one of my role models Tim Mack, who was the gold medalist in pole vaulting in the 2004 Olympics. He said to me ‘You’ve got so much ability!”

Needless to say, Maddie would like to be in either or both of those qualifying meets! The opportunity for the World Junior games is limited to 16 and 17 year olds who have attained a certain qualifying height. Maddie says with a conviction that speaks of her desire to be a contestant, “It is a once in a lifetime opportunity!” Only the top two contenders from these meets will advance and represent the USA in the games. And if advanced, the logistics of time and finances come into play; competitive sports are expensive in terms of equipment, travel, accommodations and incidentals.

Maddie’s mom, Dixie, is a nurse practitioner at the Naval Hospital; dad, Chad, is a sports photographer; older brother, Tim, is at college and younger sister, Lily Mae, is in the third grade; so many schedules need consideration when Maddie competes.

Maddie is grateful to her coaches, who in turn all speak very highly of her. Coach Gibbes McDowell says, “Besides her obvious athletic skills, I believe Maddie’s greatest assets are her commitment to making the sacrifices of time and of being a normal 16 year old girl, to do the extra strength and gymnastic training required to excel at the top level of her sport and her mental toughness as a ‘clutch jumper.’ Maddie has won many competitions on her third and last attempt to break a tie with other good vaulters who could not control their anxiety and outside distractions to focus wholly on a single, maximum, go-for-broke attempt. This is how she won the 2012 State Championship. She and another girl were tied on height and attempts at 12 feet; Maddie cleared this height and went on to clear 12 feet 6 inches for the win.” Coach Rusty Shealy says this about her, “Maddie is a wonderful athlete and a wonderful young lady. Extremely coachable, she has the talent and the drive, but also she is able to make the adjustments that we ask her to make and that’s a rare quality. Some are easy and some are hard and they take time, and she makes good quick adjustments. She’s a pleasure to coach and I’ve coached a lot; once in awhile it’s like you can read each other’s minds.”

With not only her own hard work, but the help of all those who support her, Madeline Aune is a sure bet to get to wherever she wants to go. So look up, toward the sky over the high bar, and follow her star. 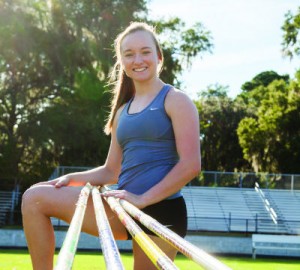