The Parish Church of St. Helena: An Important Part of Beaufort's History

The Parish Church of St. Helena in downtown Beaufort, South Carolina was built in 1724 and is one of the oldest active churches in all of North America.

The Commons House of Assembly, under the Lords Proprietors of Carolina, established St. Helena’s in 1712 as a colonial parish of the Church of England. Construction of the church building was delayed by the Yemassee Indian War of 1715. Built of brick, much of which originally was ship’s ballast and smoothed over with stucco, the church has been enlarged several times-in 1769, 1817, and 1842. The original building was repaired and enlarged in 1769. In 1817, the 1769 building was extended to the west. The extension was retained in 1842 when the remainder of the church was demolished to ground level.

The present sidewalls were constructed at that time, and the foundations of the 1769 church were used to support the interior galleries. 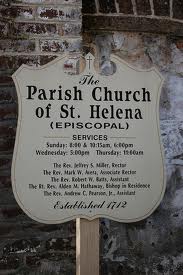 Some of the wealthiest and most prominent families in the American South were represented in St. Helena’s Church. Among them were Barnwells, Heywards, Elliotts, Rhetts, Fullers, Graysons, Wiggs, and others. The parish and the town produced many men of mark in politics, scholarship and religion during the Antebellum years.

During the Civil War, when Union forces occupied Beaufort in November 1861, the entire congregation fled. Initially during the occupation, church services were held there, but eventually Federal troops converted the church to a hospital. The church was stripped of its furnishings, marble tombstones were brought in for use as operating tables and the balconies were decked over to make a second floor.

The present altar was given by the officers and carved by the sailors of the U.S.S. New Hampshire stationed in Port Royal Sound during the reconstruction era.

A hurricane on September 29th 1896 destroyed the east end of the church. When the debris was cleared away, the altar remained intact. The east end was subsequently rebuilt in its original form from salvaged bricks. By 1998, the 286-year-old church was badly in need of restoration and repair. The side walls were separating, the mortar crumbling and the roof needed work. The balconies, without pews or kneelers, were unsafe and major work was needed on both ends of the church, with asbestos needing to be removed.

One of the earliest burials in the churchyard was Colonel John Barnwell (1671-1724), better known as “Tuscarora Jack,” a famous Indian fighter and a founder of Beaufort Town in 1711. An early settler of the Carolina colony from Ireland, he won his nickname by successfully leading an expedition to northern Carolina against the Tuscarora Indians in 1711.

Two British officers, killed in the battle of Port Royal at Gray’s Hill during the American Revolution in February 1779, are buried in the churchyard. Recovered from a hasty grave on the battlefield, they were interred by an officer of the American forces, who read the funeral service from the church’s altar prayer book and then reportedly said, “Soldiers and fellow citizens: We have now shown our enemies that we have not only the courage to face and beat them in the field, but that we have the humanity to give their dead a decent and Christian burial.”

Also buried in the church yard are two Confederate generals. Best known is Lieutenant General Richard Heron Anderson (1821-1879). The other is Brigadier General Stephen Elliott, Jr. (1830-1866). A planter and politician, Elliott fought as the captain of the Beaufort Volunteer Artillery during the unsuccessful defense of Port Royal against the Union invasion in November 1861.

The Parish Church of St. Helena celebrated its Tricentennial just a few years ago. The town of Beaufort has grown, fallen, rebuilt and prospered right along side this amazing church for over 300 years.  Today, just like in the past, the Parish Church of St. Helena is an important part of the Beaufort community hosting many events each year including its traditional Thanksgiving Dinner for the needy, many concerts, an enormous Bazaar and much more.

Take time to visit and walk the grounds. Covered in moss draped trees, tabby walls and iron gates that line the walkways you will find something new every time you visit.

Go and investigate the who’s who of Beaufort’s past and link them to the massive historic homes and other stories of legend that we so enjoy.

Enjoy some photos from the historic church… 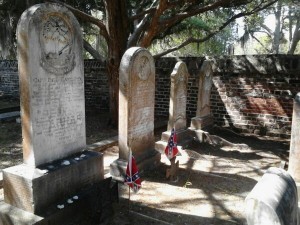