By Tess Malijenovsky |  Shopping for produce locally is one of the only ways to create a relationship with your food and farmers, making the connection between your body and the foods freshest from the earth.  Beaufort is full of wonderful local growers and there is variety of local produce stands that we pass by each and every day on our commute to and from work or wherever else our busy lives take us.

There are three produce stands between the countryside and uptown that we’ll explore as part of The Route 21 Produce Project series.

Four Seasons Produce & Southern Oysters and Clams
Feel good about what you put in your body, starting the relationship off with a lovely drive out to the Beaufort area countryside where you’ll find Four Season Produce & Southern Oysters and Clams. This stand off US-21/Trask Pwky (less than five minutes past Lobeco) is well worth the drive because its produce are guaranteed—as in you can return produce if it’s gone bad or doesn’t taste good—and has one of the largest variety of fruits, vegetables and seafood at a reasonable price. 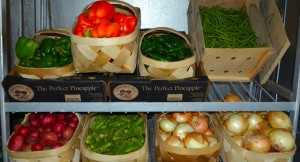 for 24 years. He travels around South Carolina to pickup the produce from wholesale farmers markets, but a lot of the produce he carries comes from across the street from Duncan Farms (such as $3 cantaloupe and honeydew, $2/lbs okra, $1.45/lbs tomatoes, $15 bushels (54 ears) of corn, and $1.79/lbs plums). They keep a lot of the fruits and vegetables in a large walk-in freezer. Inside you’ll also find $3 beautiful blackberries baskets, $3-$4 watermelons, $1.50-$1.79/lbs peaches, $1 mangos, 89¢/lbs sweet potatoes, 89¢/lbs red potatoes, 79¢ green peppers and $1.35 orange/red pepers, $1.50 pint of grapes, 79¢/lbs onions, 2 for $1 cucumbers (smaller ones 3 for $1), 79¢/lbs cabbage, $2.25 brown eggs (Columbia, SC), and green beans.
You’ll notice that a lot of these produce prices are cheaper than your neighborhood grocery store.
In addition to this plethora of produce variety, Roy claims that Southern Oysters & Clams is one of only two places in South Carolina that can sell shucked oysters. He also carries local shrimp (I bought mine for $6/lb with the heads) and clams. Roy’s stand, like so many other local farmers and produce stands, have been hit hard by strange weather, hikes in gas prices and dips in the economy; but he hopes to one day open up a family-style restaurant in the dining area attached to the produce shop. 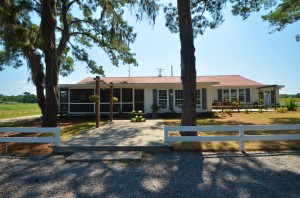 or lunch while their children play with the petting animals or run up and down the expansive farm property. Next to a picturesque cornfield, Lowcountry Produce is part-produce stand, part-restaurant and part-store carrying nationally acclaimed Southern delicacies made in-house from pickled peaches to sweet potato butter.

The recipes are a part of the Garrett family who bought the property about 15 years ago. They consider themselves “an authentic Southern artisan company,” and once you visit the store in Lobeco you’ll understand why.

Walking in a week ago, I walked through the screened-in porch that is the produce stand where you’ll find rocking chairs among tomatoes and squash. Lowcountry Produce makes an effort to also buy as much local produce as possible, such as from Dempsey Farms on St. Helena Island, Dwight 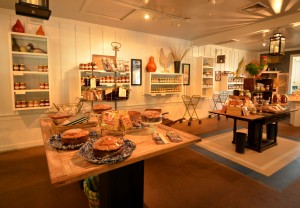 Garret tells me. He also explained that with a year-round demand from customers, sometimes they have to buy regionally, “but that doesn’t mean [the produce] can’t be today and in my cooler by tomorrow”. Just last week the store was carrying the following produce: $1.75/lb tomatoes, $1.50/lb yellow squash, $1.10/lb cumbers, $1.50/lb zucchini, $1.50/lb red peppers, $1.25/lb green peppers, 90¢/lb baking potatoes, 90¢/lb red potatoes, 60¢ oranges, $1.10 grapefruit, 40¢ lemons, and more. Dwight was kind enough to show me the canning room where some sort of delicious smelling peach chutney was in the stewing process.

Outside I tossed a ball with a lab, enjoyed petting some handsome goats, and there was also a pot-bellied pig, chickens, rabbits and even a pony. The Lobeco location is especially busy in October when families come to pick out pumpkins. This year the Garrett brothers—Dwight and Noel—opened a new Lowcountry Produce location in downtown Beaufort on Carteret Street, which is more of a specialty grocery store that serves dinner Thursday through Saturday in addition to breakfast and lunch all week. 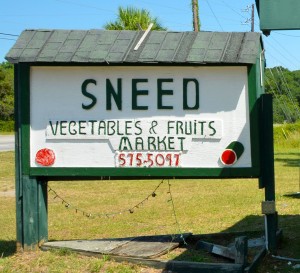 and the intersection with Robert Smalls Pwky. Mr. Sneed has been farming for more than 50 years (although you would never guess his age if you saw him) and sells a lot of his own produce such as some fine looking heirloom tomatoes ($2.50/lb). His produce is also locally-grown.

While chatting with Mr. Sneed, a standing-by woman boasts that Sneed’s has “the best peaches in town”. I’ll have to say, they were delicious. I was lucky catching the market open on a Tuesday afternoon because locals will usually find Sneed’s market 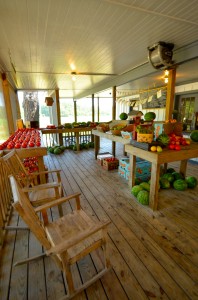 Stay tuned as I cross Lady’s Island Bridge and explore a surprising number of other produce stands and farmers. St. Helena Island is actually considered one of the last “green spaces” in Beaufort, having a lack of concrete and a welcome abundance of dirt roads that lead to fertile farmlands.

If I didn’t catch your produce stand or one that you shop love shopping at, email me at eatstayplaybeaufort@gmail.com so that I can include it in this series. No stand is too small!

We support our sponsors 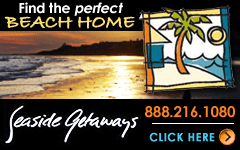