The story of Robert Smalls: Deserving of a Hollywood movie

Many people have wondered why there hasn’t been a movie made based on the life of Beaufort’s Roberts Smalls. We’re among them. His life is an amazing story. A story that needs telling. Yet, surprisingly enough, it’s a story that isn’t yet widely known, and that’s quite mind-boggling.

Just take a look at this story….

Smalls was born in Beaufort on April 5th, 1839 to a house slave named Lydia. Lydia was a house servant for plantation owner John K. McKee in a home on Prince Street in Beaufort. he had already taught himself to read and write with help of a Miss Cooley, a school teacher

At the age of 17 Robert married Hannah Jones, 33, a slave hotel maid. They had three children. As a free agent on “Slave’s time”, Smalls worked in Charleston as a waiter at the Planter Hotel, lamplighter for the city, stevedore and, in time, as a laborer on a commercial ship docked in the city.

Working on a ship, Smalls learned a great deal about sail-making and sailing the tides of Charleston harbor. Smalls’ keen navigational skills earned him a job as the pilot of the Confederate gunboat The Planter in March 1861. He was known as an expert pilot, and had studied the maps and sea charts of South Carolina and Georgia. 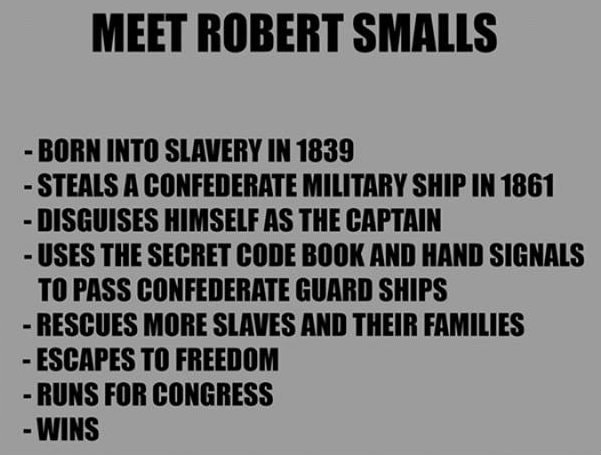 Meanwhile, the fellow slaves aboard The Planter planned their escape to freedom. They chose the able seaman Robert Smalls as their leader.

On May 13, 1862, with his wife, children and twelve other slaves on board, Smalls took the Planter from the dock in front of the Confederate commander’s office and headquarters.  After successfully passing Fort Sumter, the Planter approached Onward, the nearest Union blockading vessel, which was preparing to fire on it. After a white flag was raised, the Planter was allowed to come alongside. Smalls surrendered the ship, and gained everyone’s freedom.

Smalls bravery became a national sensation as media coverage praised him for delivering into Union hands “the first trophy from Fort Sumter.” Equally valuable to the Union was the information on mine placement, rebel troop dispositions, and a code book of Confederate flag signals which Smalls provided to Admiral Du Pont, commander of the South Atlantic Blockading Squadron. Retained as pilot of Planter due to his intimate knowledge of local waters, Smalls served as pilot on other vessels, including Du Pont’s Flagship, Wabash.

On December 1st, 1863 when the Planter became caught under intense crossfire from two batteries and a ship. Smalls took command of the vessel in place of it’s Captain and brought it to safety. Smalls was then appointed captain in his place, becoming the first black captain of a vessel in the service of the United States.

In 1866 Robert returned to Beaufort, and, with his Congressional prize money, purchased the house in which he and his mother had been slaves. He took care of his former owner John McKee’s wife until she passed away. The house was entered on the National Register of Historic Places as a National Historic Landmark in 1975.

Smalls then began a life in politics. He served in the South Carolina State Senate; served in 44th, 45th, 47th, 48th and 49th U.S. Congresses and also served as U. S. Collector of Customs.

Now, seriously. Why no movie?

All it takes is for the right people to hear the story. A Hollywood screenwriter. A producer. Just that one person.

When you have to chance to tell someone Robert Smalls’s story, tell them. They may pass it on to someone else. And so on. It may, one day, fall on the ear of the right person and then the world will finally know the story of Robert Smalls. Sea Captain, hero, politician, and slave.

America could use a new hero. A real hero.

We have one right here in Beaufort.