The Talbird House, once located on Black’s Point (now ‘the Point’) was one of the many early tabby structures in the Beaufort area. Destroyed in the ‘Great Fire of 1907’, all that remains is the front stairway, known to many as ‘the stairs to nowhere’. 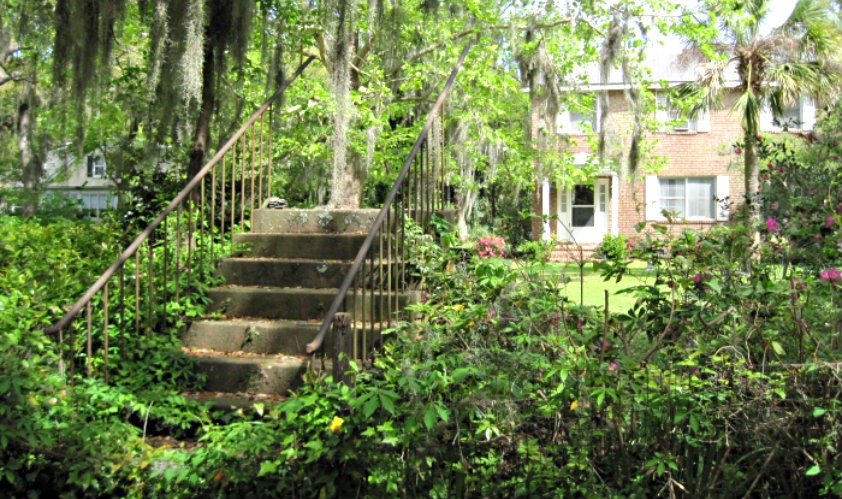 The date of construction of The Talbird House is not exactly known, but family tradition puts the date to be around the early part of the nineteenth century. Photographs of the ruins of the Talbird House show it to be two-and-one-half stories raised over a high elevated basement. The house boasted a tiered porch on the south, west and more than likely the east facades. The north facade had a single-story shed that ran east to west and created two small wings. A door

located at the center of the first and second story porches implies that the home had a through-hall plan, with hallways opening up to single rooms on the right and left of the entry way. There are not many documents or images of the home to give a full description.

Colonel Thomas Talbird (1759-1803), at the turn of the eighteenth century, was a very busy man. He was known in the Beaufort area as having expert knowledge of tabby building. Many of Beaufort’s very important projects were bestowed upon him.

He is credited for the original building of the Beaufort Arsenal (1795), the reconstruction of the St Helena Church (1798), the Captain Francis Saltus house located on Bay Street, and most importantly, the erection of the Beaufort College (1802-1804).

This unique skill of erecting tabby structures did get passed on after the death of Colonel Thomas Talbird in 1803. His nephew, Thomas Talbird (1784-1843) who was 21 years old when the Colonel died, carried on the tradition for his uncle. There were questions of which of the two are credited for the construction of the Hancock Street house, but dates place the younger Thomas as the possibility. Thomas Talbird could have been responsible for the work sometime during the early nineteenth century since he was then involved with various building projects. His projects include repairs to the Beaufort College in 1811. He was also considered

as an “expert mechanic” on the condition of the original Baptist Meeting House in 1842. He stated that the building was near collapse and the walls in question were unfit to support a new roof with safety. Despite an appeal from parishioners, the congregation agreed to demolish the old walls and put a new brick church right to the south of the old one. Thomas died the following year. It is believed that if he had lived he would have been in charge of constructing the new Baptist Church.

Upon his death, his son Franklin Talbird (1822-1880), inherited the Hancock Street property. The tradition of building was passed on for four generations. A United States Census of 1860 listed Franklin Talbird as owning 22 slaves, personal property worth $22,000 and real estate worth $7,000. The slaves he owned were of a very mature age leading one to speculate if Franklin inherited skilled slaves or if he trained to be a builder. The oldest listed was 85 years of age.

Franklin’s buildings are not as documented as the elder Talbird men. His few known include several homes in Beaufort, as well as the Brick Baptist Church (dated 1855) on St. Helena. During the Civil War and the occupation of Beaufort by Union forces, the Talbird house became 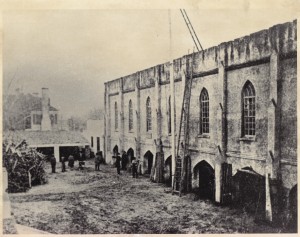 Beaufort Hospital #3. When the war was over the home was auctioned off and bought by a Captain William James for a ridiculous sum of $60. Fortunate for the Talbird family, the Captain defaulted on the note and Claudia C. Johnson, Franklin Talbird’s sister, paid the United States Treasury $250 for the property in 1866.

Franklin Talbird did eventually return to Beaufort and to his home on Hancock Street prior to 1870. He passed away in November 1880 and is buried at St Peter’s Catholic Church. His oldest son, Thomas Talbird III (1855-1928) lived in the home till the “great fire” of 1907. The roof was set ablaze from sparks and the house was reduced to a shell.

The ruins of the Talbird House stood until 1924 when they were considered too dangerous and were demolished. What remained of the outbuildings were far less of a threat and were left standing. 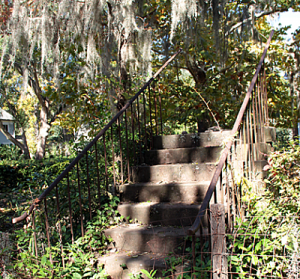