The remains of 10 military veterans from South Carolina were interred on Friday afternoon at a very moving public ceremony in Beaufort National Cemetery complete with honor guard, taps and a bagpipe player.

Veterans from three counties, Charleston, Horry and Lexington, from four armed service branches, the Air Force, Army, Marine Corps and Navy, were interred.  Their service stretches from 1951 to 1974, encompassing the Korean and Vietnam wars.

The ceremony began at the Beaufort Veterans of Foreign Wars post on Castle Rock Road where a procession of approximately 100 motorcycles ridden by members of the American Legion, VFW and Patriot Guard riders, and the veterans’ remains were taken to the cemetery in the procession in a hearse from Anderson Funeral Home.

The Beaufort National Cemetery is the final resting place for more than 19,000 veterans, spanning every major American conflict since, and including, the Civil War.

For more photos of the ceremony, please visit our Facebook page. 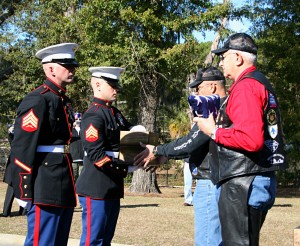