Very special 'Key to the City' given to Candice Glover

By Mary Ellen Thompson | When the powers that be at American Idol asked our Mayor, Billy Keyserling, to present Beaufort’s very own Candice Glover with a key to the city on her hometown visit, Billy told them “We have a key but we don’t need it because our hearts are open to all, so a key is not necessary.”

Knowing what they wanted, however, he instead veered from the obvious and employed his visionary creativity. He commissioned Jery Taylor, renowned native basket weaver, to fashion a basket in the shape of a key made out of indigenous grass. Billy said, “I thought it was more appropriate than a traditional key. They insisted on a key, so I wanted something that would give the world a chance to see an important part of Candice’s ancestry, and the heritage of the uniqueness of Saint Helena and the Sea Islands of Beaufort, SC.

I chose Jery Taylor because she is the only basket weaver who still weaves the traditional Saint Helena basket which is fashioned solely out of bull rush rather than the more widely known sweetgrass basket which is more common to the Charleston area.”

Jery Taylor’s roots are steeped in the basket weaving tradition. At age five, Jery was taught the craft by her grandmother at Boone Hall Plantation in Charleston, SC. Her highly acclaimed and collectible sweetgrass baskets have won many awards; they are displayed in 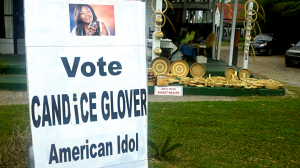 The Smithsonian Institute in Washington DC, the San Francisco CA airport, have won ribbons in the South Carolina State Fair, traveled with the show “Soul’s Journey: Inside the Creative Process” and are displayed in galleries throughout the southeastern United States. Jery has been featured in several publications including Southern Living, Pink, Imara Women, and Beaufort Lifestyle.

Jery explains how the little known bull rush basket came to her attention. “When I was selling baskets in the Charleston market, a man came to me and asked about a bull rush basket, but I had never seen anything like that; I was just making sweetgrass baskets. But when I went to Heritage Days at the Penn Center, I saw the bull rush baskets they have there. It was there that I met Miss Jennie Cohen who wove the bull rush baskets; when I asked her to teach me she said she didn’t want to teach it, she wouldn’t teach it, that she would take that technique to her grave, which she did. So I figured it out on my own.”

What makes the bull rush basket different than the sweetgrass basket? Jery explains, “The technique is different, it’s a different process. On a sweetgrass basket the lines are vertical, on a bull rush basket the lines are diagonal. When comparing the two, you can immediately see the difference. It’s not widely known that Saint Helena has it’s own basket, which is known as the ‘Beaufort Basket’. It is the style of basket weaving that was originally taught at the Penn School. I’m now the only person who weaves the ‘Beaufort Basket.’” 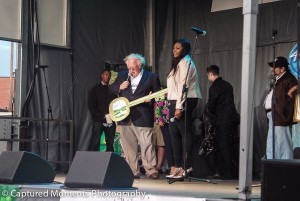 Once Jery’s weaving was complete, Billy gave the basket to St. Helena artist, Terry Brennan, to paint the inside. Terry chose a panoramic marsh scene that he thought would evoke St. Helena Island for Candice.

The creation of the key basket itself is a collaborative process of Billy’s ingenuity, Jery’s talented craftsmanship, and Terry Brennan’s artistic touches to create a truly one-of-a-kind collectors piece for Candice, who has captured the heart of everyone in Beaufort, SC as well as across the nation.

When Mayor Keyserling gave the key to Candice, it was a magic moment, the perfect moment, one that she will remember the rest of her life.  It was special.

For HUNDREDS of photos of ALL of the Candice Glover American Idol Hometown Hero events, visit our Photo Gallery>>>