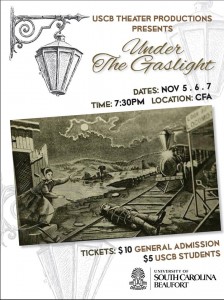 By Libby Ricardo | The Department of English and Theater at the University of South Carolina Beaufort will present “Under the Gaslight,” a Victorian stage melodrama, Nov. 5, 6 and 7 at 7:30 p.m. at the USCB Center for the Arts, 805 Carteret St.

The show will feature a cast of eight USCB students and a script that has been revised to emphasize comedy over melodrama. It is being directed by George Pate, Ph.D., assistant professor of English in Drama and Theater at USCB.

“It’s a damsel-in-distress story,” Dr. Pate says. “In its time, it was in style, but to us it’s over the top and melodramatic. In the original time, it would have been played more for suspense. We’re playing if for laughs. All of our props are cardboard or plywood. We’re really playing up the comedy of it.”

“I’m fascinated by this show as a theater historian because it contains the first instance of the convention of having someone tied to the train tracks,” Dr. Pate says. “The villain has tied someone to the train tracks and the train is bearing down on them. It’s a male hero and he is saved by a woman, so it’s sort of a reversal of what we think of when we think of that image.”

The cast made extensive revisions to the original script, now in public domain, and recreated it in their own way.

Tickets are available at the USCB Center for the Arts box office. Tickets for general admission are $10. Tickets for USCB students are $5. Contact the box office at 843-521-4100 or uscbcenterforthearts.com.

For more information about “Under the Gaslight,” contact George Pate at 843-208-8364 or pategj@uscb.edu.