Everybody has a dream.  For some, it starts as a child.  Many want to be a firefighter, a police officer, a teacher or a doctor when they grow up.  But what happens when you actually do the thing that you’ve always wanted to do?  Just ask Candice Glover.  She followed her dream… from St. Helena Island all the way to American Idol.  After being cut on a few of the show’s previous seasons, she is back and was told by the hosts during her audition on January 23rd that ‘you are the best audition we’ve had all season’.  Star Nicki Minaj told her ‘I am obsessed with you, and I want to skin you and wear you.’  A little creepy, but flattering too.

We were very happy to be able to get a few minutes with Candice, all arranged by the fine folks at American Idol. 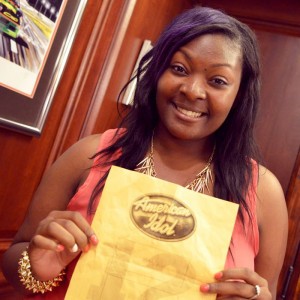 One of seven children and singing since the age of 4, as a child Candice was too shy to sing in front of people.  “I wouldn’t even sing in front of my parents”, she says.  “They would have to close the door, and I would sing as long as nobody was looking at me.”

Well, she’s sure come a long way since those days singing at Church of the Harvest on St. Helena.  Citing “Yolanda Adams and CeCe Winans as early inspirations”, her roots were firmly planted in gospel music as a child.  By the time she graduated Beaufort High School in 2008, those early inspirations had been combined with later styles from Christina Aguilera, and it’s no wonder Candice has a unique and strong singing style and voice.

“I sung my first solo in church at the age of 9 or 10.  It was a CeCe Winans song, and I was scared”, she said.  “But as I got older, it came easier, and I credit my mother, Carole, for providing me with lots of support.  I owe everything to my family, and to my church family.”

Q:  Who are your personal inspirations?
A:  My mom.  I was kind of an outcast growing up, never being the popular girl, and my mom always told me ‘to never give up on my dreams’.

Q:  What does being on American Idol mean to you?
A:  It means that I am proving to myself and to the world that being rejected, that being told ‘no’, means absolutely nothing.  I’ve never given up.  And, I owe that to my mom too.

Q:  What would you do if you won American Idol?
A:  First, I would have to get up off of the floor. (with a laugh)  Being cut previously was a humbling experience.  I would certainly remain humble and stay grounded and I would hope to be an inspiration to others who live on St. Helena.  There is so much hidden talent on St. Helena. I would hope to be an inspiration to people, showing them that it doesn’t matter where you’re from, you can do anything.

We also asked Candice what she would say to Beaufort if given the chance.

Her response, ” Wow.  The support from the Beaufort-area made me happy.  I’d want to thank everyone for their support.  The fact that the community is behind me, means so much to me.”

There was her chance.  And there’s your response.

Make sure you tune in to Fox tonight at 8pm to watch and to continue to support Beaufort’s own American Idol, Miss Candice Glover.

Special thanks to Fox Broadcasting and to American Idol’s Public Relations team for contacting us and helping to arrange this interview. 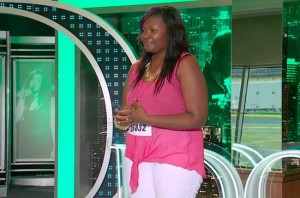