A weekend of band hopping around Beaufort

By Mary Ellen Thompson | As sure as there is going to be a weekend…there will be band hopping. Thursday nights are always a short hop but we now have an extra step – in addition to Kirk Dempsey and the Bull Grapes playing at Q on Bay from 8 until 11, Vic Varner is playing on down the street and around the corner on Thursday evenings at Breakwater Restaurant and Bar from 6:30 until 9:00.

Friday starts out with the Sometimes Later Band at Lowcountry Produce Market and Cafe from 6 – 9; from there take a quick hop to Bricks on boundary for SWIG, then hop, hop on over to the Back Porch Grill for the Warsaw Island Boys who will be playing for your pleasure between 7:30 and 10:30, and save your last long leap for the Bull Grapes out at the Foolish Frog from 7 until 11:00.

Saturday’s hopping starts at 6:30 with Mac Arnold and Plate Full of Blues at Port Royal Street Music, the Parris Island Marine Band Summer Concert will start at 7:30 at USCB Center for the Arts, the concert is free but you do need to pick up tickets. Afterwards hop on out to the Foolish Frog to listen to the sounds of Vic Varner between 7 and 11:00.

It’s starting to sound like the Vic Varner weekend, isn’t it? If you just can’t get enough of him, Vic and friends will be back at Saltus River Grill for his usual Sunday evening gig between 6:30 and 9, so stroll on over. 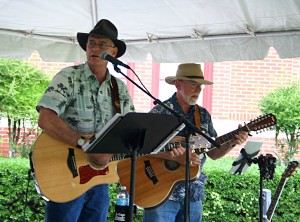