Saturday saw the area’s first Cast Iron Chef competition at the Southern Living inspired Bottles & Barrels event at Habersham Marketplace. Seven local chefs took part in the 30-minute timed culinary challenge that was judged by Southern Living Magazine’s test-kitchen chef Robby Melvin and all had to use bacon as the main ingredient in three prepared dishes. 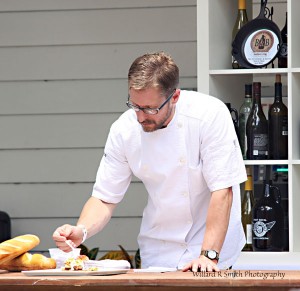 Habersham was all abuzz with hundreds in attendance along with video cameras, jumbo-trons, craft beer and Mondavi wines. Attendees were treated to a cooking demonstration by Chef Melvin, assisted by eatstayplaybeaufort.com food writer Stephanie Venz. Local vendors turned out to join in the celebration and we were happy to be treated to great food from Wined It Up and Olive the Above in addition to the all you can sample craft beers and wines.

Bottles & Barrels coming together was just a bonus for us all.

A traditional Southern Sunday Jazz Brunch will be held on Sunday from 11am-2pm to close out the event. For more information, visit www.bottlesandbarrelssc.com. The event is organized by the talented and tireless team over at Plum Productions.

Take a look at a few photos from the day’s event. See lots more in our Bottles & Barrels Photo Gallery.
Photos by Willard R. Smith Photography for ESPB.