Band hop til you drop this weekend

By Mary Ellen Thompson | Just when you think things might be winding down a bit as we have stepped over the summer line ever closer to fall, think again! This weekend has lots and lots going on so don’t put your hopping shoes away just yet.

Thursday, as we have come to expect and enjoy, has Vic Varner at Breakwater Restaurant and Bar from 6:30 until 9:00. This Thursday we have a new little skip and hop on out to Lady’s Island and The Tavern in Royal Pines where Maggie Rogers will entertain between 6 and 9 – newly remodeled it’s a great place for those of you out in that part of town and not so far for the rest of you. Back to Bay Street for some later night entertainment at Luther’s Rare and Well Done with Chris Jones starting at 9:30ish.

Friday night will pull you in all sorts of directions so you can start at Lowcountry Produce Market and Cafe where The Bull Grapes will rock the evening away starting at 6 and playing until 9. You might want to put your 50’s costumes on for the contest at 7 before the first performance of Grease at 7:30 at USCB Center for the Arts where you can quietly pretend to hop in your seats. Its a great cast and everyone knows someone starring in it. However, if you band hop tonight you will have other opportunities for Grease tomorrow night and Sunday afternoon as well as next weekend. So onward skipping over to The Back Porch Grille for Mark Bonds starting at 7 and playing until 10, and the usual leap on out to the Foolish Frog where Sam Milner will be playing between 7 and 11.

Saturday has a nice selection of hopping opportunities with Pickin By The River at The Waterfront Park between noon and 5:00. Then bounce on down to Port Royal for Street Music on Paris Avenue with the Americana Karp Foley Band starting at 6. Of course you must wind your way with a leap, out to the Foolish Frog for the Sometimes Later Band who will have a few little surprises for you between 7 and 11.

Sunday’s stroll takes us to Saltus River Grill where Vic Varner and friends will hold court between 6:30 and 9. 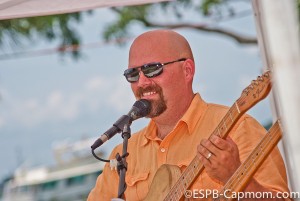