By Ashley Hamm | Two words describe Friday night’s opening of “Grease”, the latest production of the Beaufort Theatre Company and the USCB Center for the Arts…..hopelessly devoted.

USCB holds a long-standing reputation for bringing fantastic theatrical productions to Beaufort, and this production definitely deserves its place near the top.  CFA director, Bonnie Hargrove, welcomed a packed house, praising the three months of hard work that the cast and crew have devoted to the show.

While the show was scheduled to open at 7:30pm, a Grease costume contest kicked things off at 7pm with contestants donning some fantastic renditions of classic characters. Much of the audience got into the spirit and were dressed in their best 1950s get-ups as well, which ignited the show’s opening night with immeasurable energy and excitement.

The set, built by Greg Rawls, was multi-dimensional, bursting with color and it helped tell the story of the 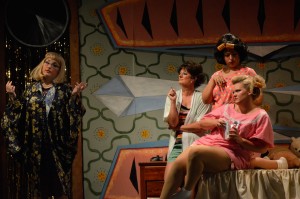 It all comes together so easily, making Grease a don’t-you-dare-miss-this event of the season.

Sitting in the audience enjoying the performance, the talent of the cast was more than one could hope for. Each of them “sincerely and truly” (as radio DJ Vince Fontaine would say) committed to the characters, and their musical talents were mind-blowing. Not one of them ever broke character, even when the scenes contained freeze frames, alternating between the Pink Ladies and the T-Birds. The laughter just didn’t stop. These guys and gals really know how to ham it up, and they all delivered a phenomenal and non-stop entertaining show.

Corrie Frohnapfel played Rizzo, the original “mean girl”, to a T. She had the saunter, the sass and the voice. Karl 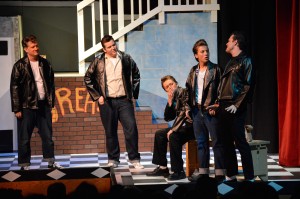 Wells and Elaine Lake made a dazzling Danny Zuko and Sandy, and really encompassed the characters’ mannerisms – Danny’s cool goofiness and Sandy’s naïveté – that we have grown so accustomed in ever-watching the 1978 film version. James Duffy, an English and Theater instructor at USCB, strutted his stuff as Rizzo’s favorite T-Bird, Kenickie. Brad Ballington, award-winning hair dresser and owner of Bliss Salon, incited 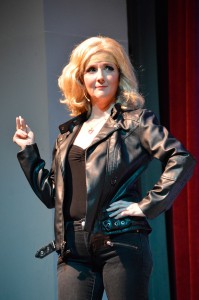 nothing but hysterical laughter with his role as Teen Angel, and rocked that shiny, silver suit. Angela Chancay plays everyone’s favorite “beauty school dropout”, Frenchie, and gets to rock some awesome wigs throughout the show. Andrew Hillis, as Roger, and Christian Osborne, as lovable Doody, show off their extensive vocal and musical talents in several tunes, as does Lynleigh McLain in her role as Marty, who croons about her suitors and the long list of gifts they give her. Anna Powell Schaffer plays the lovable and hilarious Jan. Rounding out with some hilarious one-liners of his own are Alex Long as the comical, yet often-crude, Sonny La Tierri, who provides so much comic relief among the T-Birds, it was impossible to keep a straight face when he was on stage.

Grease is an iconic story that, while set in the 1950’s, transcends time and is relevant to anyone who has been through high school. The show is family fun at its finest and is a must-see this season.

For dozens of photos from the opening night performance, visit our Photo Gallery. 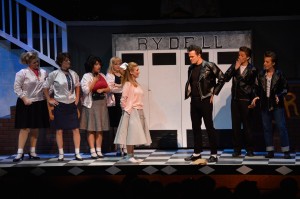 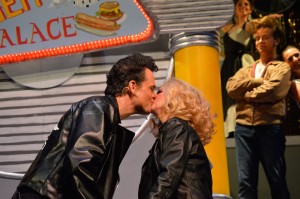 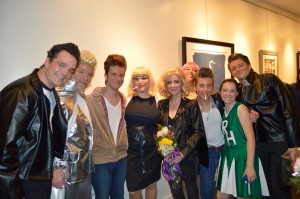