Candice Glover to perform with Beaufortonians at Fan Appreciation Concerts

St. Helena Island’s Candice Glover has announced that she is hosting a two-night ‘Fan Appreciation Concert’ this January up the road in Hampton, SC.

Local fans will actually perform at the concert, opening up for Candice on each of the two nights.

Sometime ago, Candice’s camp put out a call for fans to submit videos of themselves performing. This was done 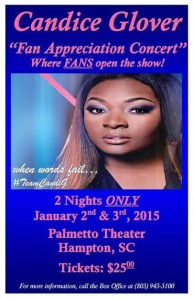 without telling anyone the reason. Then, after sifting through hundreds of performances, 20 were picked to perform live on stage as opening acts for Candice Glover and a few of her friends from American Idol; David Willis, Sarina Joi Crowe, Savion Wright, Emily Piriz and Laquan Fields.

Congrats go out to Beaufort’s Katie Godowns, Kyleigh Peeples and Tafari Salaam who were among the 20 selected along with Yasmine Ariana from Ridgeland.  Others were selected from both Columbia and Darlington, SC and also from North Carolina, Texas, Georgia and Florida.

The concerts are set for the Palmetto Theater in Hampton, SC the evenings of January 2nd and 3rd, 2015.

We’ll see many of you there. 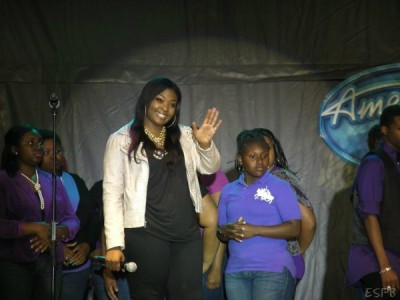