Highway 21 Drive In to open new location in Columbia

In a country where the number of drive-in theaters has dwindled over the years from some 4,000 down to a mere 360, one can now be added to the total, instead of subtracted.

Joe Barth, owner of Beaufort’s Highway 21 Drive In, is in the process of opening a new drive in near the airport in Columbia, SC. The Airport Drive In is slated to open in November or December.

According to Mr. Barth, the new drive in will boast (eventually) a whopping 7 screens, along with concessions and more and will be a spot for local concerts and other outdoor events as well. “We’ve got a lot of room. We’re clearing out land that once was a mobile home park, and that gives us lots of options,” he said.

Joe also made it a point to tell us that he “won’t soon forget what’s gotten us here. If we didn’t have the tremendous support of the people here in Beaufort, we wouldn’t be able to do this. They have shown so much love for our drive in, that without it, we wouldn’t bother to open another one.”

Look for promotions at the Highway 21 Drive In giving ticket packages to folks to check out the new location which will be located at 1420 Old Dunbar Road. (see map)

See what folks are saying about it on our Facebook page:

Here’s an image of the future home of the Airport Drive In, and another of Barth clearing the land: 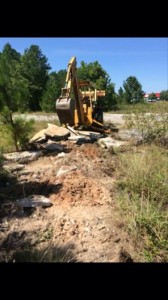