By Anna Powell Schaffer | The sights and sounds of the 1950’s may pull up images of John Travolta and that thrilling nasal ‘Ni-ights,’ or the sweet white prom dress worn by Olivia Newton John in the film, ‘Grease,’ but this September at USCB Center for the Arts, a brilliant production team and talented cast will bring a stage version of this iconic story, and you won’t want to miss what they have in store.

Grease tells the story of the Pink Ladies & the T-Birds, your typical high school clique, filled with teenage romance, show stopping dance moves, major fashion, and of course, great hair (No, we mean, really, really, great hair!). Iconic sounds from the big screen are intertwined with lesser known (and yet, genius) Broadway hits to create a fun for the whole family, ‘you won’t wanna miss it,’ good time!

What do we love about this production of Grease? The cast – Can you say T-A-L-E-N-T-E-D?

Elaine Lake stars opposite Karl Wells (Danny Zuko) as Sandy Dumbrowski and the only thing better than their chemistry on stage are their vocals. Lake and Wells take the stage as two teenage lovers ‘finding their way’ and bring the audience along for the ride.

How about Riz? Iconic ladies like Stockard Channing and Rosie O’Donnell have taken their turns playing the esteemed, yet troubled Betty Rizzo; but Beaufort’s own, Corrie Frohnapfel plays it best. Opposite James Duffy as Kenickie, the proud owner of perhaps the most famous car on any stage, ‘Greased Lightning,’ Frohnapfel will make you love and hate and love again one of the ‘meanest girls’ to ever walk the halls of Rydell High (Or maybe any school for that matter….). The gang wouldn’t be complete without the beautiful Marty, played by Lynleigh McClain, who croons over her suitors with absolute grace, in her song, ‘Freddy, My Love;’ Frenchy, played by Angela Chancay, everyone’s favorite ‘Beauty School Dropout;’ and the always hungry and sweet, Jan, played by myself.

These Pink Ladies are stacked with experience on the stage, some sweet dance moves and sounds that will have you begging for an encore. They are joined by the rest of the T-Birds filled with one-liners, come-backs and many laughs. The hilarious and almost always crude, Sonny La Tierri, played by Alex Long, rock and roll legend ‘wanna-be’, Doody, played by Christian Phillip Osborne, and the youthful and well-intentioned, Roger, played by Andrew Hillis, come together with Danny Zuko & Kenickie to create the ‘clique’ every guy wants to join, with the flair and confidence that bring hits like ‘Greased Lightning,’ and ‘Rock and Roll Party Queen’ to life.

The Greasers are joined by the ever-obnoxious brown-noser, Patty Simcox and the brilliant, yet inexperienced, Eugene, played by Trissy Long and Noah Westman-Barth. Daniel Bittick and Jason Lake take on the roles of Johnny Casino & Vince Fontaine to bring the iconic hand jive scene to life, taking you back to the smooth sounds of 1950’s rock and roll. Brad Ballington leads the girls in perhaps one of the most famous songs of the show as the ‘Teen Angel’ in Beauty School Dropout, while Velma Polk wrangles the greasers and the rest of the cast as the ever constant and never pleased, Miss Lynch.

Picture this cast, in perfect harmony led by the musical direction of Penney Smith and an incredible orchestra, while giving you incredible choreography by Valerie Hobbs including, but never limited to the Hand Jive, Stomp, Cha-Cha and Mashed Potato, under the stage direction of Libby Ricardo, making her debut in the Beaufort area. Too much!

Okay, so you are convinced, it is the must see of the season, right? Now you just need to get some seats and make plans to spend the evening with the coolest kids in town.

Grease opens September 5th 2014 at 7:30pm, with shows running September 6th & 13th at 7:30pm and September 7th & 14th at 3pm. Audience members are encouraged to compete in the costume contest on opening night, September 5th at 7pm. Tickets are available online at USCB Center for the Arts, www.uscbcenterforthearts.com or by calling the box office (843) 521.4145. Adult Admission is $25, Seniors $20 and Students $15. Grease is presented by special arrangement with Samuel French, Inc. 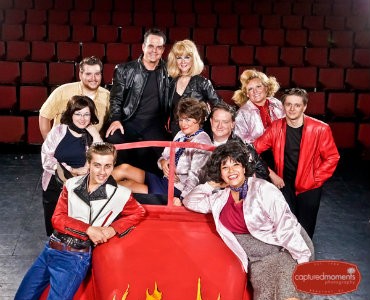