Buy Julie Hales | When I walked into the Arts Center at Beaufort High School, I was a bit taken aback. What I saw, and experienced, was far from what I had anticipated. I had been approached by a parent of one of the students on the Drama Team to write a story about an anti-bullying play the high school students were performing. I had heard some other buzz around town about it as well and thought, ‘What a better time to do this…in our Film Festival Issue.’

I contacted the Drama Teacher at Beaufort High School, LaRaine Fess, and made arrangements with her for an interview and photos. Mrs. Fess seemed super excited for the opportunity and quickly arranged for some of the students to be present for the interview and to perform scenes of the play for our photographer to capture.

On a recent Saturday afternoon, my photographer, Susan DeLoach and myself walked into the theater where Mrs. Fess and the kids were anxiously waiting. What unfolded next was something I will soon not forget.

When entering, the first thought in my mind was ‘Oh my, typical teenagers, running around, playing, exchanging gossip’…you know the drill. But, as introductions were made, it was certainly proven to be much different than that. These kids possess something far greater. It is quite evident from the first moment you meet them there is much more to these guys than being a typical teenager. There is talent, camaraderie, a rare sense of family.

Getting down to business, Mrs. Fess and I started the interview. The play, When You See Something, Say Something, is an anti-bullying play performed by the students. But this play has a special meaning to many, and especially to LaRaine Fess.

Mrs. Fess’ eight year old son was bullied. Her child was a third grader at Lady’s Island Elementary School. He was on the bus on his way home from school one day. He was pushed accidentally into the aisle and quickly took a seat, not wanting to get in trouble for being in the aisle. An eighth grade student approached him and threatened to punch him in the face if he didn’t move out of her seat. The young boy was scared and started crying, leaving the seat to the much older student.

This young boy did not tell his parents about the incident. He was afraid. Mrs. Fess found out what had happened from the mother of one of her son’s friends who had witnessed the encounter.

LaRaine Fess was astonished. Her son had been bullied. “I was blindsided. Who would bully my kid? He is confident, well liked, he has performed on stage….how did this happen,” Mrs. Fess shared with me. “I didn’t find out about this for 2 weeks after it happened. My son was afraid to tell me, knowing that I would do something about it. He thought I would embarrass him and cause more problems with the kids and they would tease him.”

Mrs. Fess started doing research on bullying and her findings were not pleasant. Bullying has become a major issue in our school systems today.

She went to her students one day and told them of her son’s experience. She asked them if they had ever had similar situations. To her surprise, many of her students spoke up and told her about their own experiences of being bullied. Those who had not been bullied had witnessed friends and fellow classmates being bullied. They were all in agreement that bullying was a problem that something needed to be done about.

One of her seniors at the time suggested they write a play about it. Other kids quickly agreed. They joined together and started putting skits and music together. Mrs. Fess says, “I was looking for a way to help my son and a way for me to deal with what had happened to him. I didn’t expect these students to be my answer.”

The play, When You See Something, Say Something, has gained quite a bit of notoriety. These students have performed this anti-bullying play all over the low country and as far away as Chapel Hill, North Carolina.

“We are a touring show. We have performed in many of the local schools from here to Hilton Head, for the Beaufort Regional Chamber of Commerce, for the Rotary Club of the Low Country and in Myrtle Beach. We will be heading to Columbia on February 6th to perform for Governor Haley and we have been asked to perform at a Rotary Convention in Baltimore, Maryland on Mother’s Day Weekend. We had no idea this would grow to this magnitude,” states Mrs. Fess.

Through this interview process, there were moments we would stop talking and the students would perform different skits form the play for Susan to capture. From the pictures on these pages, I am sure you can envision the feelings as I had.

These students were captivating. Not only in their performance, but in the way they addressed me afterwards. These guys were enthusiastic, excited and showed a true passion for what this play means to them. Some of them shared their own stories of being bullied with me. They shared their hopes, their dreams and their aspirations for the future.

One of the students, Meg Lacombe, a senior at BHS is one of the original cast members of the play. She, herself, was bullied. Meg shares with me, “I went to a very small school where both my parents were teachers. There was no policy on bullying. I was picked on all the time for just not being the ‘norm.’ Sometimes it would happen in front of teachers who just ignored it. It got to the point that I just stopped talking in class and stopped talking to my parents. I just wanted it to stop.” Meg has learned how to stand up for herself and take control. She wants the bullying to stop in the schools. She feels those being bullied get very depressed and sometimes suicidal. This is a problem she wants to see go away.

Meg adds, ”Bullying doesn’t end when the last bell rings. It goes home with you on the internet. It is on Facebook, Twitter and all other social media….it’s called cyber bullying. A student can be bullied all day at school and still go home and see the hate on their computers.”

Russel Perry, another senior in the play, says, “I have been bullied since I was in the 6th grade. It started small but just grew. I started high school in hopes it would get better, but it didn’t. I have been beat up, pushed into lockers, you name it. I am actually from New Jersey and things were bad there. We moved here in 2011 in hopes of a new start. But the bullying didn’t stop. In fact, it got worse.” Russel has already had to transfer out of one area school to BHS. “I transferred to BHS for my senior year. Things are much better here. I am not bullied here. Mrs. Fess and all of the drama students welcomed me into the drama program. Being involved in this class has helped me build my self-esteem,” adds Russel.

At this point, the kids are sitting around me sharing stories. It is enlightening to watch them talk about the play and about their own experiences. It is very obvious from this interaction, these kids admire and respect their teacher, and each other. One of the students, Tiffany Jackson, said, ”We are like one large family, everyone loves everybody. When things get stressful and busy, we get rude and nasty…..just like a big family.”

As I am getting ready to ‘wrap things up,’ I ask a big question. “What do you kids want to do when you leave high school. Do you plan on going to college to pursue a degree in theater?”

The answers started coming at me like bullets being fired from a machine gun. I heard answers like, “I want to be in tech theater,” “I am going to do sound, lighting, and staging.” And “”I want to perform.”

LaRaine Fess just sheepishly smiles at this. You can tell she loves what she does and she loves these students. A bad incident with her own child turned into something far greater than she ever imagined……a chance to help other students overcome this growing problem. Her wish to make a difference about bullying in our school systems has come to life on a stage at Beaufort High school.

__________
Original story by Julie Hales for Beaufort Lifestyle Magazine.  To read more about the wonderful people, places and events of Beaufort, Port Royal and the Sea Islands, pick up your copy of Beaufort Lifestyle at nearly 200 locations throughout the Beaufort area or check it out online.  Photo by Susan DeLoach 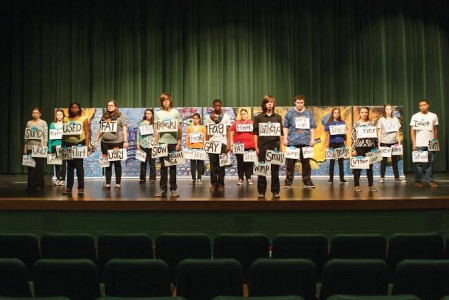