Beaufort's History: The Story of the Old Sheldon Church

Surrounded by old majestic, Spanish moss filled Oaks the Old Sheldon Church is a must-see in the Lowcountry!

The Old Sheldon Church Ruins, located just outside of Beaufort in Yemassee, SC along Old Sheldon Church Road, was originally known as Prince William’s Parish Church. The church was built between 1745 and 1753 in a Greek Revival style of architecture. The Church is said to be the first conscious attempt in America to imitate a Greek temple.

The original three-and-one-half foot thick colonnaded walls of Flemish bond and the four all-header bond portico columns remain, attesting to the solid construction and master craftsmanship which enabled it to withstand… over two hundred fifty years of existence. Complete by 1753, Sheldon Church was built along a row of seven Tuscan columns (six engaged, one outstanding). The western façade had an elegant portico, crowned by a triangular pediment with bulls-eye window and cornice with dentils. The large front doorway had a fanlight above and two round-headed windows, symmetrically spaced, on either side.

On the north, five bays between the engaged columns were filled with a single tier of tall, round-headed windows; the other bay was left open for a portico. At the eastern end, above the alter, was a Palladian window, with a round-headed window to each side History claims Prince William’s was burned by the British in 1779 during the Revolutionary War. In 1826 it was rebuilt and legend says it was later burnt by William Tecumseh Sherman, in 1865 during his march through the south.

The following is from an article in the April 1969 Sandlapper Magazine by Charles E. Thomas, “The Picturesque Ruins Of Old Sheldon Church”. “The official South Carolina report on the ‘Destruction of Churches and Church Property,’ after the War Between the States, described Sheldon’s second burning: All that was combustible was consumed…, its massive walls survive the last as they did the former conflagration, Bishop Thomas wrote, Exactly as it happened a hundred years before in 1779, when General Prevost, marching from Savannah into South Carolina burned the Church, so now in February 1865, General Sherman marching from Georgia into South Carolina, burned it a second time.”

However another account more recently states that the church was not burnt at all.

In a letter dated February 3, 1866, Beaufort’s Miton Leverett wrote that “Sheldon Church not burnt. Just torn up in the inside, but can be repaired.” The inside of the church was apparently gutted to reuse materials in rebuilding the area homes that were burnt by Sherman’s army. 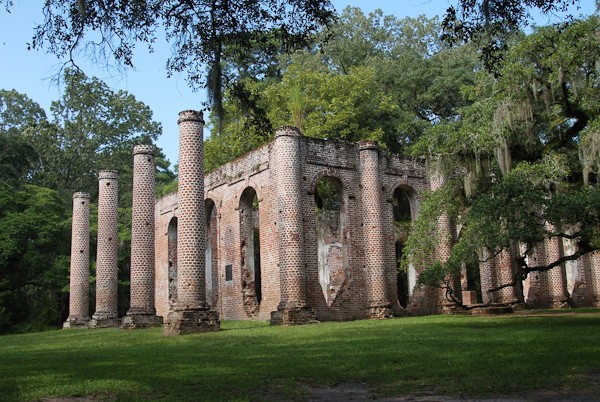 The ruins are surrounded by old majestic, spanish moss filled Oaks. Graves are scattered throughout the grounds. Inside the ruins of the church lies the remains of Colonel William Bull, who greatly assisted General Oglethorpe in establishing the physical layout of Savannah, Georgia. Bull surveyed the land in 1733 to form the basic grid pattern of the streets and squares, to which Savannah is now famous for.

Another question remains: Are these grounds haunted?

The most well-known tale features a woman dressed in a simple brown dress, perhaps Pilgrim style, standing over an infant’s grave. A feeling of sorrow reportedly comes over visitors who walk near the child’s tombstone.  The woman’s name is Ann Bull Heyward. She also resides in the graveyard.

There have been other accounts of ‘strange’ activities, such as heavy footsteps being heard, and flashing lights in the area that are unexplained. An apparition of a young girl in a white dress in the road outside the property has been reported as has stories of people being grabbed by ghosts while walking the grounds.

Check out what the Southeastern Traveler came across when he had a spooky run-in with the supernatural at the Old Sheldon Church Ruins.

The site was listed in the National Register on October 22nd, 1970.