By Shannon Roberts | Run Forrest…run! On Wednesday evening, folks at Fripp Island enjoyed the ‘Run Forrest Run’ Mile Fun Run. Academy Award winning movie Forrest Gump is celebrating its 20th anniversary this year and Forrest Gump has a special place in the hearts of many, but it’s extra special to Beaufort and our surrounding areas.

The filming crew used Beaufort as the beautiful backdrop for the movie.  Many of the Vietnam scenes were filmed on Fripp Island, in the area which is now the Ocean Creek golf course.  Forrest Gump, Bubba, and Lieutenant Dan tromped through the Fripp Island maritime forest, with digital mountains added in the background.

Bubba’s momma was filmed in a New Haven condo after she received her HUGE Bubba Gump Shrimp check.  It was an exciting time to be on Fripp Island during the filming 20 years ago.

To mark the occasion, Fripp Island Resort has been celebrating with Forrest Gump themed activities all week.

About fifty participants gathered at Wardle’s Landing, not far from where the Vietnam scenes were filmed. to run 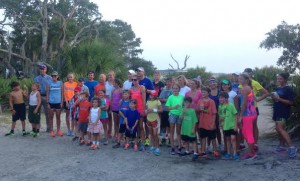 a mile.  Many showed up in Forrest Gump gear, such as plaid shirts and trucker hats, inspired by Forrest’s cross-country ultra running trek.

The race took off to many shouts of “Run Forrest Run!” as participants tried to “run like the wind blows.”

Over in about 7-10 minutes, racers gathered back at the start-finish line to spout off a few favorite Forrest Gump running quotes before dispersing. 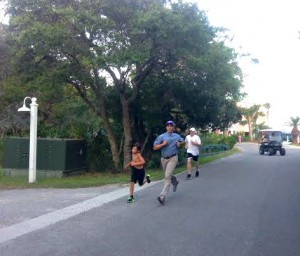 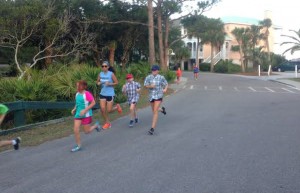