By Donna Young |  Components of the current South Carolina State Flag were first seen in 1765, on a banner carried by South Carolina protesters of the Stamp Act. The banner that the protesters hoisted displayed three white crescents on a blue background. Ten years later in 1775, Colonel William Moultrie was asked by the South Carolina Revolutionary Council of Safety to design a banner for the use of South Carolina troops. Colonel Moultrie chose a simple and direct design that displayed the crescent (new moon) on a blue field. The new flag was the same blue color of the soldier’s uniforms and the silver crescent was the symbol that the soldiers wore on the front of their caps.

n early March 1776, Colonel William Moultrie was ordered to Sullivans Island to supervise the building of a “large fort” there. From the 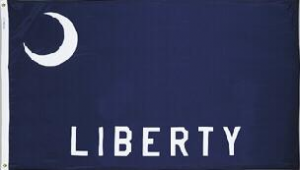 beginning, the fortification was intended for seacoast defense. Its purpose was to make an invasion as costly as possible, or, better still, to prevent an invader from landing at all. During the next weeks, Moultrie’s work gangs cut thousands of spongy palmetto logs and rafted them over from the other sea islands and the mainland. As the fort took shape, its design was likened to “an immense pen 500 feet long, and 16 feet wide, filled with sand to stop the shot.” The workers constructed gun platforms out of 2-inch planks and nailed them together with spikes. Moultrie himself concluded that “everyone was busy, and everything went on with great spirit.” The square-shaped fort, completed only on the seaward front, presented no invincible image. Palmetto walls, 16 feet wide and filled with sand, rose 10 feet above wooden platforms for the soldiers and their guns. A hastily erected palisade of thick planks helped guard the powder magazine and the unfinished northern curtains. A motley assortment of hard-to-get cannon, ranging from 9- and 12-pounders to English 18-pounders and French 26-pounders, dotted the breastworks, the southeast and southwest walls, and the corner bastions.

put up aginst Colonel William Moultrie and about 400 Continental soldiers defending an uncompleted fort. The British intended to take Sullivan’s Island, then use it as a base for overcoming Charleston Harbor and the city. They planned a two-pronged attack, with a landing force of 2,500 redcoats under General Sir Henry Clinton’s army sailing with Commodore Sir Peter Parker’s men-of-war. While the British navy pounded the fort at the south tip of the island, troops under Clinton and Lord Charles Cornwallis would land small boats on the Isle of Palms, cross Breach Inlet, and attack Moultrie’s garrison from the rear. Col. Moultrie was at Breach Inlet on the morning of June 28, visiting the advance guard encamped there. He saw the British boats and men-of-war in motion, and raced his horse back to the unnamed fort at the other end of the island.

When the British began firing, the Continentals had thirty-one cannon, and less than thirty rounds of powder. Moultrie’s orders were not to waste fire, and “never did men fight more bravely, and never were men more cool.” During the day, boats delivered supplies of gunpowder from Charleston and Mount Pleasant, but there was still too little for comfort. At one point, Moultrie stopped firing entirely, reserving powder for the muskets that would be needed against a land attack. However, Clinton’s army failed to cross Breach Inlet, defeated by the treacherous tides and American infantry. The battle of Sullivan’s Island lasted nearly ten hours. The British cannon had no effect on the earth-filled palmetto log walls of the fort; only the shots that came above the wall or through the embrasures took any lives. William Moultrie’s men continued firing even after sunset, listening as their shots hit the British ships. Finally, Parker called a retreat and moved his ships out of range. Moultrie was able to claim victory and hold Charleston off from British occupation.

Sullivan’s Island against an attack by British warships. . The Palmetto Tree was added to the State Flag to represent Moultrie’s defense of Sullivan Island. On January 28, 1861, following secession from the Union, the South Carolina Legislature adopted a blue flag with a white crescent at the hoist and a white Palmetto Tree in the center. That flag has continued to represent the state ever since. Our state flag is not only beautiful but it is full of history and tells a story of the magnificent battle of Fort Moultrie.