Clara Barton and her 'battlefield angel' visits to Beaufort

Clara Barton has been a household name for generations as the creator of the American Red Cross, but did you know she came to the sleepy little town of Beaufort, South Carolina on more than one occasion?

Two events brought this ‘battlefield angel’ to our sleepy little town. The first time it was the Civil War. Clara Barton arrived to Beaufort’s Sea Islands with the Union Army to assist with the implementation of the Port Royal Experiment. On November 7 1861, seven months after the start of the Civil War, Commodore Samuel Du Pont began the attack on Fort Walker and Fort Beauregard; the two forts standing as guards to Port Royal Sound. 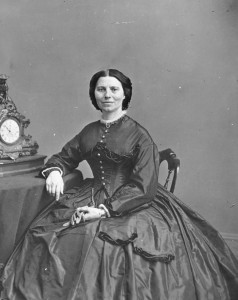 General Thomas Sherman, leading the U.S. Army ground forces, then began occupation of the Sea Islands, freeing roughly 10,000 slaves and maintaining Union control in the Sea Islands of South Carolina. Clara Barton was among others including Thomas Wentworth Higginson, Robert Gould Shaw, Robert Smalls (a local we all know of and love) and Harriet Tubman who flocked to Beaufort and the Sea Islands when the Union established the Port Royal Experiment.

The Union Army established the Port Royal Experiment to focus its attention of the thousands of now freed and displaced slaves left in their care when they gained control of Beaufort. Establishing a freedman school and trade schools during and post Civil War to educate the newly freed slaves and teach them to be self sufficient and able to care for themselves. One such school still stands today on the grounds of Penn center.

Clara Barton came back to Beaufort’s aid in 1893 with a new organization called The American Red Cross during the aftermath of a devastating hurricane which destroyed much of Beaufort’s phosphate industry and its indigo and rice agriculture on August 27, 1893. The ‘Sea Island Hurricane” as the storm is commonly referred to today, killed nearly two thousand people and displaced thousands more.

Damage was estimated at about $1 million with the storm washing crops, livestock, homes and hundreds of victims out to sea.

According to the NOAA website, a Category 3 storm made landfall near Savannah, Ga. Pieced together from the few existing meteorological records, the storm surge was approximately 16 feet, causing massive damage along the coastline, destroying most of the barrier islands structures, and ruining the crops that were nearing harvest.

Her return was landmark in the gathering and distribution of food and supplies to the thousands of displaced people all over the Beaufort area, and it showed just how the Red Cross could be instrumental in aiding people in time of disasters. This was the first major hurricane relief operation ever undertaken by the Red Cross, and it was very helpful.

She was concerned that the Red Cross could not provide ample resources to help survivors because of the overwhelming size of the relief effort, but the 72-year-old Barton was not one to turn away pleas for help.

“From the beginning it had been evident this would be a prolonged work, for it was necessary to provide for the people until their next crop could be harvested, nearly a year later,” as noted in Clara Barton: Professional Angel by Elizabeth Brown Pryor, published in 1987.

In addition to food, for nearly a year, the Red Cross administered medical aid, tools, seeds, and housing materials along with a planting rehabilitation project that helped sustain the people of Beaufort.

Barton wrote in her autobiography describing the effect of the hurricane to the area:
“The submerged lands were drained, 300 miles of ditches made, a million feet of lumber purchased, and homes built, fields and gardens planted with the best seed in the United States, and the work all done by the people themselves,” she noted.

She said about 20,000 refugees were living in the streets of Beaufort immediately after the storm. In October, she moved the food distribution sites from Beaufort to the islands to lure people back home. During a massive 10-month relief campaign, success was declared, with the Sea Islands population living in decent houses producing their own food again. Barton stayed in the Sea Islands until the summer of 1894 and the remaining Red Cross staff left just before the cotton harvest in early autumn. When the relief effort was over, fields of Sea Island cotton had been reestablished and homes, schools and churches rebuilt.

Clara Barton directed the relief efforts and helped put our town back together again as devastation covered much of Beaufort. While the town would recover, Clara Barton would leave to continue her good work elsewhere.