On Tuesday, March 11th, Beaufort City Council proclaimed that the week of March 9-15, 2014, is Girl Scout Week in Beaufort. Local Girl Scouts from the area were at the meeting to receive the proclamation.

This coincides with March 12th being the 102nd birthday of the Girl Scouts of America.  March 12th commemorates the day in 1912 when Juliette Gordon Low officially registered the organization’s first 18 girl members in nearby Savannah, Georgia. 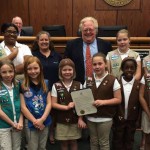