By Mary Ellen Thompson | There are few evenings more enjoyable than Wednesday nights at the Foolish Frog Restaurant in Frogmore, sitting on the deck and listening to Kirk Dempsey and Allan Webb play what they describe as the “gut bucket blues”. With Kirk playing the guitar and harmonica simultaneously and Allan on the washtub, there is much toe tapping and foot shuffling going on in the audience. The scene has been naturally set with the sun dropping behind you over the marsh until the trees are silhouetted against the night sky, and the moon sneaking up over your right shoulder.

Kirk and Allen evidence the epitome of good ole country boys. Kirk chats to the audience in between songs and Allan is the somewhat silent sidekick to Kirk’s gregariousness. Interaction with the audience keeps the entertainment factor high and the somewhat unusual assortment of songs is as long as a guitar neck. Their obvious kinship and close-to-comedy routine makes everyone feel instantly comfortable and better yet – included in the evening, while the simple beat of the music passes along the deck until it reaches your feet and makes them want to dance.

Beaufort has many wonderful music events/evenings where we are more than content to sit back and be entertained, occasionally we can be lulled into an almost nap. Not so with Kirk and Allan – they make sure we are awake, present and having fun! You can put your head back and your feet up, pop a top, and prepare to be entertained but within seconds you will wiggle your butt and get down with sound.

When asked “What about this music makes you happy?” Steve Danko, fellow musician, answered “How it’s delivered – by someone who 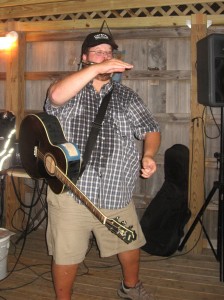 loves what they’re doing, and that comes through the music.” And he’s absolutely spot on; Kirk and Allan have such a resounding joy in playing music that it can’t help but be infectious!

The sound is much bigger than a two person band with Kirk playing the guitar or cigar box guitar, and harmonica while Allan accompanies with a surprisingly resonating twangy sound emanating from the washtub. About his somewhat unusual choice of an instrument, Allan explains, “Beek built the washtub; I used to sing backup but he built this, so I played it and I was fortunate enough to keep the beat.” (In case anyone doesn’t know this – Beekman Webb, Allan’s cousin, is a fabulous bluegrass musician.)

Kirk describes their repertoire as being a mix of “Old blues, punk rock, gospel, and stuff nobody plays any more. I play what nobody else is playing.”  Allen says, “And I play with him.”

In addition to the weekly Wednesday night gig at the Foolish Frog, Kirk can be found at Q’s on Bay on Thursday nights, and out and about elsewhere on the weekends. Depending upon the venue, Kirk also plays with Tim Devine, J. W. Rone, Dan Hodges, and Louise Hodges. 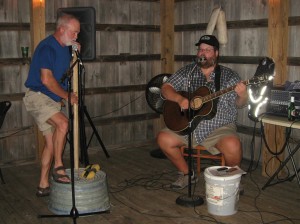