Lowcountry Food: Enjoying the best of the Beaufort Shrimp Festival

By Stephanie Venz | Beaufort sure knows how to put on a good festival. Add fresh shrimp cooked by some of Beaufort’s best restaurants into the equation and you’re guaranteed to have a good day out.

My husband and I ventured to the Waterfront Park in downtown Beaufort around noon on Saturday, where I think everyone else in Beaufort had the same idea. Hundreds turned out to sample some delicious shrimp dishes, have a cold beer and enjoy the band. I remember last year’s Shrimp Festival weather was beautiful and sunny, but almost unbearably hot. Luckily, this year missed the later and had a lovely breeze throughout the day’s events.

We started out buying our food and drink tickets from the friendly volunteers. With tickets in hand, we had the big decision on what vendor to try first! We started with Papaya Thai and Sushi Bar. I ordered a shrimp summer roll and enjoyed the freshness of the roll and the crunch of the lettuce. I could eat these for lunch everyday. 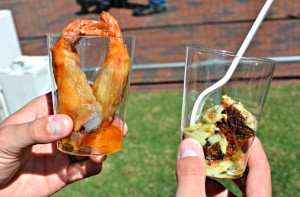 I then went to Southern Grace’s creatively decorated tent. Spoiler alert – Southern Graces served my two favorite tastings of the day! The first was named “Beaufort Bay Shrimp Wraps” and honestly I have no idea what was in them apart from shrimp, but they tasted amazing. I can only explain them best as a shrimp spring roll, on a stick. The second dish was called “Southern Sushi Rolls.” Not your traditional sushi roll, these were fried (of course they are fried – we are in the South, y’all!) The sushi rolls were surprisingly fresh, even though they were fried. I guess you will just have to try them yourself one day to understand where I am coming from!

Next, we went to Sea Eagle Market’s food van. This vendor was definitely the busiest, and consequently had the longest wait. I think people figured if they were going to eat some shrimp, they’d better order it from the one of the best suppliers in Beaufort. We ordered the spicy shrimp cool lettuce wrap, and some steamed peel and eat shrimp. Both were delicious, however I felt the steamed peel and eat shrimp were a tad too messy for a standing event – I mean where was my little lemon water bowl to rinse my fingers? That’s just the snobby foodie coming out in me and is a lesson learned for next year.

The last stop on the shrimp-eating venture was to Emily’s tent. We ordered a serving of their fried shrimp and fried oysters. While I’m not a huge fan of 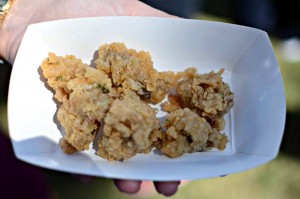 oysters, I tried them anyway. Unfortunately, I’m still not a fan, however I overheard others nearby exclaiming how tasty they were. The fried shrimp was cooked exceptionally well.

On the way out, I still had four tickets remaining burning a hole through my pocket. How could I pass by The Island Fudge Shoppe ’s tent without trying anything? I chose to go with some classic chocolate fudge and was not disappointed with my decision. The fudge was so rich and creamy, and I can’t wait to try some more flavors.

It seems like we’ve had a lot of shrimp to eat right? Well you’re right, and it only cost $40 total, including drinks, several shrimp dishes and a fudgy delight for dessert!

Overall, my personal vote went to Southern Graces. I think the restaurant displayed their food creatively and the food served was very appetizing.

The Beaufort Shrimp festival results are as follows : 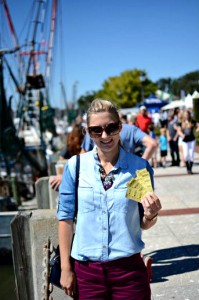 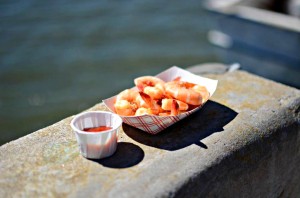