By Stephanie Venz | Good eats, good drinks, and good entertainment pretty much sums up the Inaugural Bottles and Barrels event held at Habersham this weekend. As the Eat Sleep Play Beaufort “Foodie,” I was lucky enough to attend the two day “Southern Living Inspired” event, along with hundreds of other attendees who turned up for the weekend festivities.

On Saturday, the day started with a cooking demonstration with Southern Living’s Test Kitchen Director, Chef Robby Melvin. Somehow I was volunteered to be his assistant on stage, helping him to make a delicious Bistro Salad. I was invited to taste the different stages of flavor as the salad was prepared, and all I can say is YUM! The dressing was a-maz-ing! Here is the recipe for Bistro Salad, as prepared by Chef Robby Melvin (and myself)!

All recipes made over the weekend had to include Southern Living Magazine’s ingredient of the year – Bacon. The Cast Iron Chef 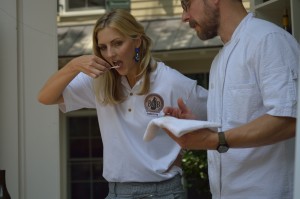 Cook Off involved some of Beaufort’s best chefs who competed in a 30-minute challenge to produce a main course, with two sides, to present to Chef Melvin for judgement. 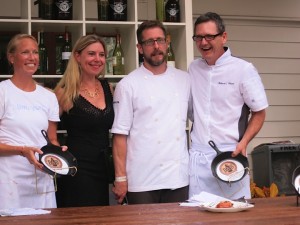 WOW! Melvin stated that he was impressed with Richard making his meal completely from scratch.

The bacon criterion was no exception to the dessert category. After much deliberation, Chef Robby Melvin awarded Victoria ‘Vivi’ Nellen of Sweet Vivi’s as the winner of the challenge. Vivi named her dessert the “Drunken Monkey” cupcake and she described it as “a banana cupcake drizzled with Anderson Valley Bourbon Stout, topped with maple bourbon buttercream and crunchy bacon.”

All afternoon, attendees were able to enjoy unlimited tastings from six different craft breweries, as well as numerous fine wines from Folio Fine Wine Partners. I enjoyed the Hangtime Pinot Noir, which was pleasantly chilled.

The Sunday Jazz Brunch was fabulous and we were graced with beautiful (extremely hot) weather. People enjoyed croquet, 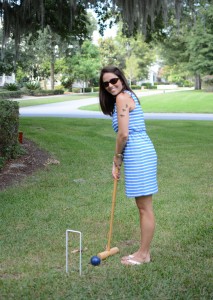 mimosa and Bloody Mary bars, and a talented jazz band called the Blue Mudd Funky Jazz Sextet. The food was delicious – three courses prepared by Southern Graces, including bacon biscuits, fruit, french toast, poached eggs, crab cakes, and bacon flavored ice cream. The tables were delightfully set in a blue and white theme, adorned with large blue vases, printed placemats and great table umbrellas (which I was certainly thankful for in the heat!)

Lydia Mondavi was a very gracious hostess, walking down the tables offering a refreshing and popular prosecco named Villa Sandi NV II Fresco, that her and her husband import from Europe. Brunch was also accompanied by various wines from Mondavi’s Spellbound collection.

All in all, the Bottles and Barrels event in Habersham was a huge success and lots and lots of fun, and I think the team at Plum Productions did Southern Living proud by truly “celebrating life in the south” …in style.

For nearly 200 photos from the weekend at Bottles & Barrels, visit our Photo Gallery. 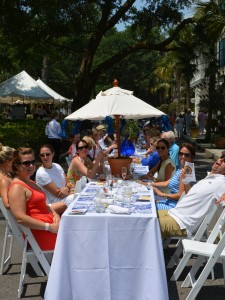 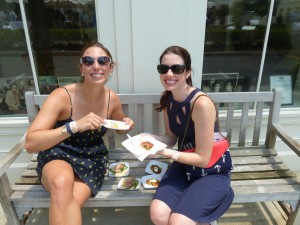 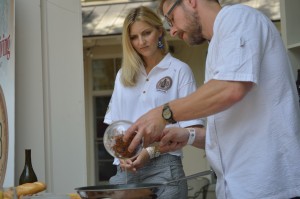