Matthew closes beach at Hunting Island through end of 2016

In a press release issued on Wednesday, the SC Department of Parks Recreation and Tourism has announced that Hunting Island State Park will be closed through the rest of 2016 due to extensive damage from Hurricane Matthew.

No beach. No Lighthouse. No campground.

The release stated in part, “Due to damage and debris from Matthew, Hunting Island State Park will remain closed through December 31, 2016. Please do not plan to arrive at the park during this time period.”

We spoke with SC Department of Parks Recreation and Tourism Communications Director Dawn Dawson-House on Wednesday afternoon and she added, “the entire park is shutting down due to infrastructure issues and the Nature Center and Visitor’s Center will be closed as well. Anyone with reservations for the campground will be refunded.”

When asked if this was set in stone, Dawn said “once we can get in there and assess the damage completely we’ll have a firmer plan in place. Some parts or even all of the park could reopen sooner than planned, or sadly, later than planned. We just don’t know for sure at this point.”

In a press release made later int he week, the State PRT announced, “the Nature Center at Hunting Island will reopen starting Wednesday, October 19. The center will serve as an information point for visitors wanting to know more about recovery at the park. The Nature Center will be open and fully-staffed from 9 a.m. to 5 p.m. each day.”

Reservations made through the end of the year are being refunded and if you have any questions regarding your reservation or refund please contact the South Carolina State Parks Call Center at 1-866-345-7275.

This story will be updated when we talk with the State PRT next week after their full assessment for more information.
Here’s some video taken from the entrance to the Park on October 9th by Kim Sullivan and posted to our Facebook page: 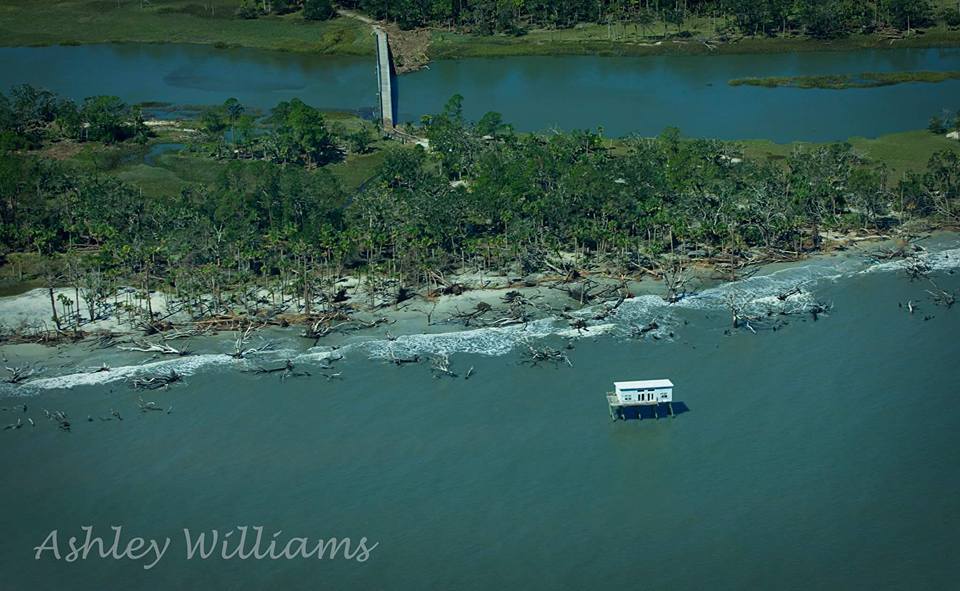 This aerial photo of Little Blue taken on Sunday, October 9th also shows trees down along the edge of the maritime forest at Hunting Island. The full extent of damage is still unknown. Photo by Ashley Williams