By ESPB and Regan Zeller |  When the members of Sea Island Animal Hospital’s team came into work last Tuesday, August 15th, they had no idea what was about to happen.  Late in the day, a Beaufort County Animal Control officer escorted a pet owner along with a small, scared and injured dog into the hospital and requested to be seen by the attending doctor. Upon initial evaluation, Dr. Robert Smith determined that the small dog had been attacked by a large dog. She was in shock, severely anemic, with a low body temperature, large lacerations in several locations including over one mammary gland.  She was also in extreme pain.

The wounds did not appear to be fresh because the tissue showed signs of decay. The owner of the small dog informed Dr. Smith that the dog was in fact only 6 to 7 months old, and was pregnant.

At this time Dr. Robert Smith shaved and cleaned the obvious wounds and administered antibiotics and a pain medication. He recommended radiographs of the dogs back and bloodwork and estimated that stabilization of the patient and treatment would cost 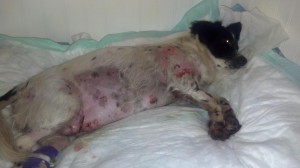 around $1,200. This estimate did not include the possibility of C –section or amputation of the patients’ right front leg.  Unfortunately, the owner did not the funds available for treatment. At this time the owners declined euthanasia as an option and requested that Dr. Smith keep the dog overnight and see where she was at in the morning.

The following morning, the patient was fairly alert, but her red blood cell count, as well as her body temperature was dangerously low.  The owner of the patient was unreachable to receive further authorization for treatment.  At this time a decision had to be made on her behalf.

She either had to be humanely euthanized or treated very aggressively for her injuries, and Sea Island Animal Hospital had to receive that answer from the owner.  The little dog was monitored closely through the day, and as the day progressed office staff made multiple attempts to reach the patients owner, and it was time to take further action.

More aggressive treatment was administered, despite failure to reach the owner of the patient.  Wound treatment, IV fluids, antibiotics, pain medication, radiographs, and ultrasound were preformed to help determine the status of the patient, now affectionately named “Gabbi”.

The attending Animal Control Officer was called at 4:30pm on Wednesday. The officer made persistent efforts to reach the owner and by 5:30pm the owner had officially relinquished ownership of Gabbi to the vet for further care.  At this time it was up to the staff of Sea Island Animal hospital to decide if it was in Gabbi’s best interest to proceed with aggressive treatment or humanely euthanize the severely injured little dog. After further evaluation, and considering all team member’s thoughts and input, it was decided that with a little help from the local pet-loving community, they may be able to save Gabbi and her puppies.

A community-wide Facebook /emailing Campaign then insued throughout the local Beaufort-area. 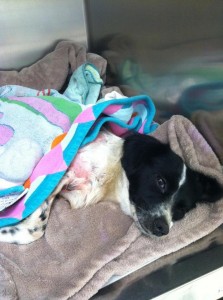 It was determined that Gabbi had four to five puppies that all appeared healthy and heartbeats were confirmed with ultrasound.
By Friday August 17th there had been an amazing response to Gabbi’s fundraising campaign. In two days, $900 had been raised.  Gabbi had 8 random visitors from the community, and donors were calling from out of state.

At this time it was then obvious that if Gabbi could pull through she was going to have all the support and medical attention she needed.

What an amazing tool social media has proven to be, and what an amazing community that came together for this little dog.  Sea Island Animal Hospital had not raised enough funds to send Gabbi to a specialist’s center for 24 hour treatment so they to devised a plan that would give Gabbi and her puppies the 24 hour nursing care she required, and an in-home hospital was created.

I’m the Hospital Manager at Sea Island Animal Hospital.  Dr. Smith and I worked together to set up a 24 hour nursing plan for Gabbi’s care. During the day she resides at SIAH under strict Doctor’s care, and after hours she has her own hospital set up at my house. I have an IV fluids pump, medications, vitals monitoring equipment, and much more that I utilize to keep Gabbi comfortable and progressing in health.

I am very happy to say that as of Sunday morning, Gabbi was walking around more often, and eating some meals on her own. Her care is still a daunting 24 hour job and she must be carefully cleaned, monitored, and managed, but she is making extraordinary progress.

As of the early morning hours of Monday August 20th, Gabbi has given birth to four puppies. After they are cared for and out of the woods, she will start the second journey in her recovery which will include surgeries to repair the deep lacerations, a possible leg amputation, and certainly some emotional healing will be involved.

Please follow her progress, and the progress of her litter, on our Facebook page at Sea Island Animal Hospital. If all goes as planned you will also get to see Gabbi as she walks in this year’s Beaufort Christmas Parade with our team members.

This little, sweet dog has shown signs of strength beyond what many of us can comprehend.
She wants to survive, and thanks to all of you we are able to give her exactly what she needs to do it.

Thanks to a caring community…a Pet Friendly Beaufort.