By Mary Ellen Thompson | In 1920, Harry and Rebecca Smith opened a grocery store on the corner of Greene and Church Streets in downtown Beaufort. They probably never thought about whether or not that store would still be open ninety-three years later. But through some coincidences, a lot of hard work, and determination, Pruitt’s Grocery is still operating from that very storefront. And not only is it still in operation, it is still in the family, owned and operated by James W. Pruitt. James Pruitt is the son of John and Bessie Pruitt; Bessie was Harry and Rebecca Smith’s niece, and she was raised by them. The Pruitt family consisted of 4 boys: James, and his now deceased brothers Ed, Lamon, and Dallas. In a series of transitions, the Smiths moved away, the Pruitts took over, and James remembers working in that store when he was in school.

It seems the grocery business had seeped into James’ blood; when he graduated from Beaufort High School in 1953, he bought his own 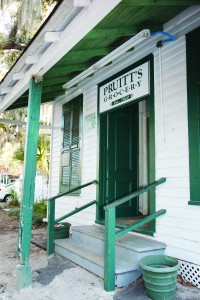 grocery store. “When I finished high school, I wanted something to  do so I bought the store on Ribaut Road,” he explains. That store was Bess’ Cash and Carry, and he changed the name to “James W. Pruitt.” Ed had taken over the Green Street store in 1951 and ran it until he died in 1980 when it closed. In 1986, Beaufort County bought the land where James’ store was on Ribaut Road, so he moved over to the Green Street location since his mother had left the building to him.

Back in the day, Pruitt’s store sold mostly meats and groceries, and candy; not much in the way of vegetables. It isn’t much different now he says, “People come here from the Island, Burton and Port Royal for the meat.” And sure enough, in the course of an hour  almost two dozen people wandered in for candy, drinks, cookies and the meat. “Do you have my favorite cookies today?” “Can I have a 50 cent red drink?” One woman drove over from Lady’s Island, she explained “I come here because it’s the best lunch meat in Beaufort County!” A gentleman walked in and asked, “Can I have $2.50 of bacon? I need it to flavor my greens.” It’s all about old-fashioned service. You don’t help yourself to the items, they are behind the counters. Mr. Pruitt gets them for you, wraps them and hands them to you,.

Mr. Pruitt is a self-effacing Southern gentleman; his smile could light up a room but he’s just very matter of fact when it comes to talking about himself. He never married and when questioned about whether or not he’s been the most eligible bachelor in town  with all the ladies vying for his attention, he blushed and laughed, just a little, just enough to admit it without having to say so. A  handsome man, he is sure to have been the object of much attraction. Good looks aside, he is also very affable and has a delightful sense of humor. 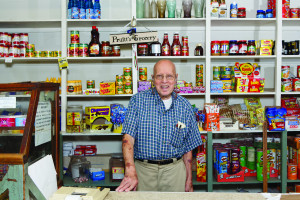 Pruitt’s Grocery is a small and cozy window into the past. School kids wander in and hop up on the old Kelvinator ice cream cooler  while they chat and decide what they want; neighbors come in looking for a bit of conversation. The shelves are stocked with canned goods, cleaning supplies, sodas, fruit drinks, cookies and candies of all sorts. Look into one of the cases and you will find an assortment of earrings, pencil erasers, mens’ boxer shorts, tubes of rubber cement, spools of thread and spools of ribbon, crayons and a pearl  necklace set.

Another old fashioned case showcases an assortment of cures for ailments: Sweet Oil, Castor Oil, Mineral Oil, Hydrogen Peroxide, Magnesium Citrate, Aspirin, Epsom Salts, Petroleum Jelly and Vaseline are on shelves next to a 1981 Farmers Almanac, a stack of old books and old Readers Digests, and a few packages of Lady Lace Hair Nets. When asked how long those hair nets had been in that case, he replied “I sold some of those just the other day; I could probably get some more. Ladies don’t seem to wear them like they used to, they used to sleep with them on.”

Hair nets are not the only way the times have changed. James Pruitt remembers Beaufort as a child, when his family didn’t have a car and they walked wherever they went. “You could go downtown and pay your water bill, your light bill, your power bill then, but no more – they all have offices out on the highway.” He remembers when there were nine wholesalers who supplied food to the stores in Beaufort; now, he says, there aren’t too many. How does he feel about the big grocery stores and chain stores that come in and change everything for small business owners? “Well, it’s just one of those things,” he replies pragmatically. Penny candy now sells for 2  pennies and candy bars have gotten quite more expensive than they used to be. There is a collection of old bottles on the top shelf and Mr. Pruitt remembers when Coke came in gallon glass bottles; “I’d sure like to have one of those gallon bottles in my collection. I think they quit making them because if they fell over, the tops would break.” He does, however, have the entire set of 1964 Dr. Pepper calendars taped up to the wall.

The store is open six days a week from about 2:30 in the afternoon to 8:00 at night. He says he used to open around 9 a.m., then maybe 10:30, and it just got later because that’s when his customers came. “People started coming here when it got dark, summer or winter it’s the same, I guess they just want to get everything done they can during the day. At my store on Ribaut Road, I opened before dinner and often was there until 3 or 4 in the morning!”

Six days a week ties him down, and when asked if he ever traveled his response was “No, I just stay in the store.” If he had to do it all over again, would he chose this? He says, “I probably would.”

What does he do in his precious little free time? “A lady at church saw me out the other day and said it was the first time she ever saw me anywhere but church or the store.” He has been a faithful parishioner at the Parish Church of St. Helena all of is life. He doesn’t like to read all that much, but he does like to watch football on television – what team does he favor? “No matter what team, my friends like football so I watch it with them. They like to watch tennis, so I watch that, too.”

Those friends are John and Betty Barton; Mr. Pruitt has lived with them since he had a heart operation in 1999. When asked if he ever cooks for himself he responded that no, Betty cooks for him. Does she buy her groceries in his store? “No,” he laughed and said “Well, a lot of that stuff I wouldn’t have here anyhow.”

Has he ever thought of retiring? “I thought about it one time and changed my mind. I thought I’d get pretty tired of sitting around and doing nothing!” Which is a really good thing for downtown Beaufort because men like James Pruitt, and the establishments like his – which are too few and far between, really are the soul of a community.

Just go in, sit on the ice cream chest or perch on a stool, have a chat, buy some lunch meat, and you see for yourself.

Written by Mary Ellen Thompson for Beaufort Lifestyle Magazine
Photos by Susan DeLoach
Published bi-monthly, Beaufort Lifestyle is a classy, sophisticated publication about the wonderful people, places and events of Beaufort, Port Royal and the Sea Islands. Grab your free copy at any one of 200 area locations or check it out online at http://www.beaufortlifestyle.com. 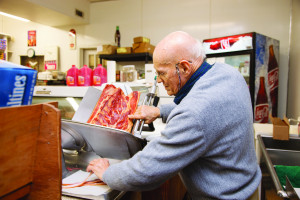