By Cindy Reid | Mountain stream cool water clear. That’s what it sounds like when Amanda Brewer sings. She makes “The Star Spangled Banner” sound good. She is one of those singers who makes it sound easy while singing something very hard. Bottom line, you just want to hear more.

And she is nothing if not versatile, from fronting her own group, “The Brewer Band,” to being a Worship Leader for her church’s band, all the while holding down a demanding day job as Reference Manager at the Bluffton branch of the Beaufort Library system.

Amanda is a woman on the go, on or off her new motorcycle. Her most recent big purchase is a Harley Davidson Sportster 2003, painted a very cool mystic blue with pink flames. “I have just started to learn how to ride so that is my next project,” she says, “Mac and Paul from the Brewer Band ride, and people from my church band ride as well. I am doing this so I can get out there and enjoy the lowcountry’s back roads and really see the beauty around us.”

An only child, Amanda was born in Newport News, VA, where she lived until two years old. Then her family lived outside of Raleigh, North Carolina until the 6th grade when they moved to Lynchburg, South Carolina. Lynchburg is, as she says, “A one stoplight town  between Florence and Sumter. Although it was a small, agricultural town, the slower paced way of life and strong sense of community helped mold me into the person I am today.”

There was a big plus to growing up there. She says, “Grandma’s house was two miles down the road. What a blessing to get to grow up two miles away from grandma’s homegrown country cooking! “

A love of southern cooking wasn’t the only gift passed on to Amanda. She says, “I am one in a long line of musicians. My paternal grandfather, Richard Brewer, was a preacher and traveled on weekends with a family gospel singing group, “The Brewers.” My father, Marty Brewer, and his brothers were each part of the family music group and learned to play instruments and sing.”

And on the other side of her family, “My mother is a pianist and choir leader. My mother’s mother plays organ and my mother’s father leads the congregational singing at their church. It’s only natural I would play and sing too!” Mom Nancy Huggins and step dad Bill Huggins now live in Columbia, South Carolina.  Amanda says, “They are by far the biggest Brewer Band fans!”

“The band is my first choice to do my music and it’s going great!” says Amanda. It’s a full band consisting of Amanda on lead vocals, 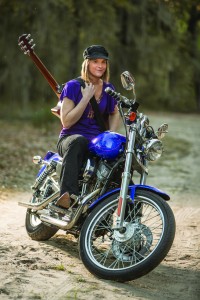 She says, “We just played at the Twilight Run at Habersham, which was  really a musician’s dream, having lots of people there listening to our music” (Approx. 2000 people attended the event). As for the future, she says, “We love playing in Beaufort and we are  expanding to Bluffton and beyond. Sometimes I play with a trio (me, Mac and Paul) and sometimes as the whole band, but I really love playing as a full band the most.”

The Brewer Band is known for their extensive and eclectic song list. When asked what songs she  particularly likes to sing with the band, Amanda thinks for a minute and says, “Definitely ‘These Boots are Made for Walking,’ is a song I never intended to do! Mac suggested it and I begrudgingly agreed to give it try and it was so much fun we added to our song list. The audience is why we play it, they just love it!”

She continues, “Fleetwood Mac’s ‘Dreams’ is another favorite, because it is not an easy song for a vocalist and it’s challenging. I love to sing it and the band likes to see if I am going to be able to pull off the right notes! It is fresh every time we play it.”Although known for her vocal skills, Amanda also plays guitar and some piano or keyboard. She says, “I also dabble on drums although the Brewer Band guys say I play like Animal from the Muppets! I also own a mandolin and violin that I would love to learn to play someday soon.”

Band member Mac McClelland says, “Amanda is the rock star librarian! And the Brewer Band is the single best party band in South Carolina. We do everything from the Jackson 5 to Adele- including ‘Disco Inferno!”

Amanda says, “I grew up in church and have always sung in church. I came across Contemporary Worship when I was in college, and found it was for me. I am the Worship Leader at my church, The Link, and I am honored to be using my gifts in a ministry setting.”

The Link is a 150 people congregation that meets at the YMCA in Port Royal Sundays at 10:30 AM. A contemporary church, services include a live band that plays worship songs, also known as contemporary Christian music. As a Worship Leader, Amanda says, “I am in charge of the band, which means I run practice, choose the songs, and I am also the lead singer. It is basically the same role as a choir director.” And there was an added benefit she says, “That’s how I met the members of my band, at church.”

After earning a Bachelor of Arts degree (Speech Communication and Religion double major) from Charleston Southern University in 2004 and a Master of Library and Information Science (MLIS) from the University of South Carolina in 2006, Amanda moved to  Beaufort to start her career as a reference librarian. She has been a Beaufortonian since 2007.

Currently she is the Reference Manager at the Bluffton branch and is keeping very busy. She says, “Right now we are getting Summer Reading programs ready for the whole  library system from Hilton Head to Beaufort. “ She adds, “Summer Reading programs are for all ages, we have an exciting program for kids, teens and adults. The theme this year is ‘Dig into Summer Reading,’ which is all about archeology and nature. The programs will include movies, lectures, and all kinds of interesting programs.”

Amanda just finished hosting a Downton Abbey Viewers Club, sponsored by The Friends of Bluffton Library. “We met every week and discussed the show and I made presentations on relevant topics such as funeral practices of the era, weddings of that time and so forth.  We had a season finale tea, which was a lot of fun!”

Musicians may play a lot of different music professionally but they often turn to one genre of music when they want to unwind.  Amanda says when she has down time, “I really like to listen to singer-songwriters. Give me a guitar and meaningful lyrics, just the music minus everything else. Patti Griffin, Bonnie Raitt and Mindy Smith are my favorites, that’s who I listen to time and time again, especially when I just want to relax. I like anything that is  ‘unplugged’ versus over produced bands.”

Amanda would like to expand her musical talents to include songwriting. “I like the advice one of my favorite musicians, Edward McCain, said about songwriting. He said ‘write a bad song, an awful, cheesy song, just to get started.’ So I will try that advice because there are songs locked inside me, I just need a way to open that lock.” She laughs, “Maybe riding my motorcycle down the back roads will do it.”

You can follow Amanda and The Brewer Band at these links.

Story by Cindy Reid and photography by Paul Nurnberg for Beaufort Lifestyle magazine.