By Cindy Reid | Local sailor Alexander Mazzeo was selected to represent the USA at the 30th International Optimist Meeting at Lake Garda in Verona, Italy in March 2013. The thirteen year old Beaufort Academy eighth grader has been sailing the single handed dinghies known as  “Optimists” competitively for almost five years. For those unfamiliar with the boat, the Optimist, or OPTI for short, is designed  precisely for use by young sailors up to the age of fifteen. Its small size and sturdiness make it an ideal dinghy for learning the sport and it is used by the Beaufort Yacht and Sail Club, as well as most sailing clubs through the world, to teach sailing. In addition it is recognized by the International Sailing Federation as an International Class.

About competing in Italy Alex said, “It was very windy, Lake Garda is probably one of the windiest places in the world. As a single sailor you are the only person in the boat, which can be over powered at 20 knots. In Italy it was 26 knots. Italy was very cold but it  was a great place to visit”.

The event is divided into two age categories, the cadets (age 9-11) and juniors (age 12-14). The cadets can race a maximum of two legs per day (8 in total), and the juniors up to three races per day (9 in total). Alex said, “There were kids there from Peru, Canada, Antigua, Croatia, Sri Lanka, Jerusalem, from all over the world really.” In fact, young sailors from approximately thirty countries took part in the event, which is held annually at different locations throughout the world. Alex said there were approximately 25 participants from the United States, “A lot of the kids from the United States were from Florida, also Maryland and New York.”

In order to get to the International Optimist Meeting, Alex had to compete at qualifying regattas. About competing at a large scale event, he says, “Some of the local competitions have only twenty OPTIs and it is very different to go from twenty kids to three hundred at a starting line.” One such regatta was held on Lake Pontchartrain, New Orleans. His mother Lisa said, “New Orleans was lovely. The Café DuMonde came to the lake with big fryers and they made bags of fresh beignets for all the sailors. Having the community support the kids makes it very special for them.”

Alex sailed in the biggest youth regatta in the world, the Orange Bowl Regatta in Miami Florida, which is held the day after Christmas every year. This July he competed in the USODA (United States Optimist Dinghy Association) Open Fleet National Championship held at the Grosse Pointe Yacht Club in Detroit , Michigan. Alex said, “It was very nice and there was a good breeze on Lake St Clair, but there were lots of weeds in the lake and I was sailing on a reach and I hit a giant island of reeds straight on! Everyone was shouting at me, ‘hey, you got stuck on a reed island!’ So I had to right my wrong and get unstuck, which I was able to do, and finish the race.” Alex finished in fourth place the Silver Fleet, out of 160 competitors.

Big brother Patrick (now 17 years old) was the first in the family to take up OPTI sailing and Alex says he followed in his brother’s footsteps. Next in line is Thomas, who at nine years old is following in Alex’s footsteps and is also an OPTI sailor. Alex’ father is Dr. Paul Mazzeo, who practices adult and pediatric neurology at Coastal Neurology in Beaufort, where his mother Lisa who is a nurse, works as well. Lisa says, “Sailing has been a wonderful sport for my sons, they gave other sports a try but found sailing to be the right fit for them.”

Brother Patrick is currently sailing 420s (a larger two crew dinghy) competitively and Alex expects to be doing the same himself after he ages out of the OPTI class at age fifteen. He is also on the Beaufort Academy sailing team and has been branching out by participating in sailing series events at the Charleston Yacht Club. He said, “They had a scrimmage for our high school sailing team and I got to skipper for the entire scrimmage, which was a fun thing.”

He looks forward to sailing through high school and then college, as many colleges, such as College of Charleston, have club and varsity level sailing teams. Down the road, Alex says he has set his sights on competing in the World Cup because “it is about thinking and strategy.”

When he is not on the water, Alex enjoys hanging out with his sailing friends and says “I like reading, any sort of book but especially historical fiction that my brother and Dad got me into. I also like to play chess.”

Alex encourages newcomers to the sport to give it a try. He says, “It always seems complicated starting out but if you just keep at it you will get to the next level. It is an unending amount of complications but in the end you will get it.”

Story by CINDY REID and Photography by SUSAN DELOACH for Beaufort Lifestyle Magazine.
Published bi-monthly, Beaufort Lifestyle is a sophisticated publication about the wonderful people, places and events of Beaufort, Port Royal and the Sea Islands. Grab your free copy at any one of 200 area locations or check it out online at http://www.beaufortlifestyle.com. 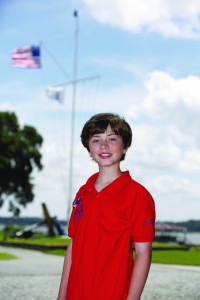