Fort Frederick: The British in Beaufort

Now part of the grounds of Beaufort’s Naval Hospital, ruins remain of an old tabby fort built by the British in 1732 for protection against the Spanish, French and Indians, and abandoned in 1758.

The fort was named Fort Frederick, in honor of Prince Frederick Louis, son of King George II of England and his wife, Caroline of Ansbach.

Fort Frederick was intended to protect the entrance to Port Royal Sound against potential Spanish, French, and Native American attacks.  Its usefulness as a defensive structure was minimal due to poor selection of the actual site for the fort. Militarily, Fort Frederick was vulnerable to attack on the west by higher ground; on the east, the walls almost ran into the River. Although local legend suggested that it had been built by the Spanish, a myth perpetuated into the early 20th century by postcards, Fort Frederick never had any direct connection with Spain neither as a builder of the fort nor as an attacker on the fort. Indeed, tiny Fort Frederick served as little more than a storehouse during the majority of the years it was in limited use. 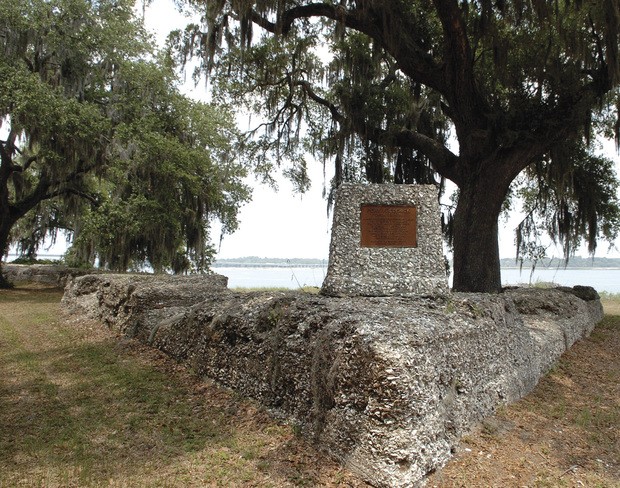 The fort was built of tabby, a building material of lime, sand, and oyster shells. It was small in size, being 125 feet by 75 feet. The walls were five feet high and four to five feet thick at the top. It may have had a moat but since that part of the fort is now submerged underwater, this is speculation. Along the eastern wall facing the Port Royal River was a battery of cannons. Inside the walls were at least two buildings, a magazine costing less than £100 in which to store munitions and provisions and a barracks for the men to sleep in.

Today, the ruins of Fort Frederick are purported to be the oldest tabby structure in South Carolina.

Personnel at Fort Frederick varied from two militiamen to almost one hundred British regulars. Staffing was dependent upon the perceived security threat. Between 1734 and 1736, Fort Frederick was garrisoned by a unit of British regulars who were later transferred to Fort Prince George, another frontier defensive installation about 35 miles north of Savannah (in what is now Pickens County, SC).

The commander of Fort Frederick in January 1737 was John Chevillete. His position as commander would end about two months later because the General Assembly eliminated the position of commander as unnecessary. Nevertheless, Fort Frederick would continue to 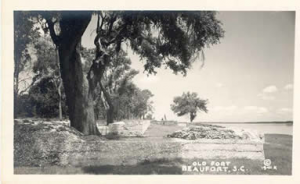 be manned, albeit sparsely and sporadically. The Council Chamber report of 1 April 1737, noted in the Journal entry for December 14, 1737, states “Capt. Lyford with a Serjeant and three men under his Command be continued to take care of Fort Frederick and the Magazine and Stores there.”  This deemed that a gunner (at an annual salary of £150 per year), and three soldiers (monthly payment £8 or £72 per man per year) were enough staff to ‘take proper Care of the Stores and Artillery’ at the fort.  Shortly thereafter, the provision allotment was increased by 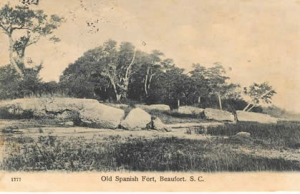 £3 per man, and it was also agreed to provide £25 per month for a doctor to take care of the men stationed at the fort. Up to £60 could be spent purchasing medicines for the men.

Among the stores housed at Fort Frederick were scarlet cloth, 100 barrels of rice, 100 bushels of peas, and 500 barrels of corn. Three hogsheads of Rum, a barrel of sugar, and a suit of colors were also inventoried for the Commons House of Assembly. The Estimate of the Charges on the operation of Fort Frederick between 26 March, 1738 until 25 March, 1739 was £371, wages and provisions.

British regulars returned to Fort Frederick in 1738 and stayed until approximately 1744. After 1744, Fort Frederick was only intermittently garrisoned. Four years later, Governor James Glen derisively described Fort Frederick to the Duke of Beaufort in a letter dated October 10, 1748 as:
“Some years ago two assemblymen were, by vote, empowered to make a fort at Port Royal and for that end received about 1100£ sterling of the public money. It is injudiciously situated, monstrously constructed and made of oyster shells, and is called a Fort, but a garden fence is as strong. It is really worse than nothing, for it may tempt ignorant people to take shelter in it in case of an enemy, and it will certainly prove a snare to those that go, whereas in case they are not able to make a stand, they may have a chance to escape if they betake themselves to the woods.”

The plaque states:
Fort Frederick
Named after Frederick Prince of Wales son of George II of England. One of the largest tabby forts ever built. It was the main defense of Beaufort until replaced by Fort Lyttleton at Spanish Point. Fort Lyttleton was destroyed during the Revolutionary War.