Lt. Dan back in Beaufort to entertain thousands (photos & video)

By Gail Ankney & ESPB Staff | Thousands of people visited Beaufort’s Henry C. Chambers Waterfront Park on Saturday night to celebrate the finale of the 3rd Annual Lt. Dan Weekend with a concert by Gary Sinise and the 13 piece Lt. Dan Band.  People came from near and far, the mega-crowd was made up of both young and old, and Lt. Dan did what he does best…entertained.

In the typical upbeat high-energy show that Beaufort’s become accustomed to, Gary and the band offered renditions of Baba O’Reilly by The

Who (also the theme song from Sinise’s popular CSI television series), the Beatles’ classic Hey Jude, Jimi Hendrix’s Purple Haze AND All Along the Watchtower, as well as hits from Adele, Micheal Jackson, Journey, Rascal Flatts, Charlie Daniels Band and lots more.  The band entertains with several different talented vocalists taking turns at the microphone, each tackling something to their own style, and the musicians are good.  Real good.

sacrifices for our Country, at one point asking all veterans in attendance to stand up and be recognized.  During a song, Sinise left the stage and went and played amongst a group of severely wounded vets.  Another was brought on stage during a duet and given two airline tickets to anywhere in North America.  (We thought being on stage would be enough!)  We even had a marriage proposal too, that went over quite well.

On stage at the event, artist Scott LoBaido helped to raise money by auctioning a painting of the American flag, which he painted live in front of the audience. The painting completed sold for $20,000 at auction and then he decided to complete a second painting from his studio for the runner up of the auction, raising an

additional $15,000 to be donated to the Independence Fund.

For over 100 photos of Saturday night’s events, follow this link to our Photo Gallery. 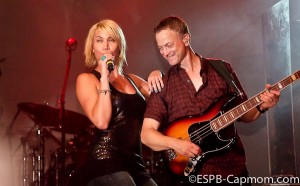