By Abigail Kraft | A community is made up of many different people, each playing his or her key role in making it special, and 26 year old native Beaufortonian Griffin Salzer may look like your average Lowcountry boy, but he is far from that.

For the past several months, Griffin has been running for St. Jude’s Children’s Research Hospital. Every other Friday, he runs his usual six mile loop around Beaufort to pick up funds from drop boxes he keeps at seven locations around the area. Griffin is especially thankful to Bricks on Boundary (shoutout for the best Greek salad!), Bitty’s Flower Shop, the Spanish Moss Trail, Chocolate Tree, Lowcountry Produce, Monkey’s Uncle, Bay Street Outfitters and Lulu Burgess. A shout of thanks comes from the runner as Griffin said, “this couldn’t have happened without these local businesses letting me set up donation boxes, and I appreciate it so much!”

Amazingly enough, running for St. Jude is just the tip of the iceburg when it comes to Griffin’s story. After attending Beaufort Academy for all twelve 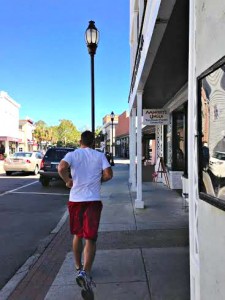 years,Meet a local: Meet Griffin Salzer Photo by Abigail Kraft he moved on to Rhodes College in Memphis, Tennessee where he studied psychology. Immediately after college, he decided he wanted to go into medicine, so he moved back to Beaufort to work as an ER tech. Currently in the process of applying to medical school, Griffin is taking classes at the College of Charleston in biochemistry and physiology.

Griffin’s exposure to various medical areas, especially growing up an orthopedic surgeon’s son, has made him certain that a doctor’s lifestyle is the lifestyle for him. Griffin has worked as a mental health technician, an ER technician, an OR technician, and a patient care technician at the Medical University of South Carolina in Charleston. “Being in the role to educate others about not just the treatment of the disease, but how to prevent the onset of it- that’s my dream,” he says. “It’s not the end result that excites me about being a doctor, it’s the process of learning what makes a person truly healthy.” 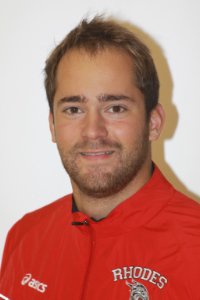 This is why Griffin chose to run as his charity work for St. Jude. He finds it his chance to be truly free and break the boundaries he’s set for himself and others have set for him. After being a college athlete, he missed competing in something and this gives him the motivation to keep going.

Running is an escape for many people but he has found a way to make it good for him and for others.
“It makes me better. The more I run, the more I collect, the farther I can expand my route- meaning I run further, which makes me better. It’s mutually beneficial, helping the community at large and making myself better,” he said.

So why St. Jude’s? Being in school in Memphis, Griffin was right down the road from St. Jude’s. He now regrets that he never set foot inside to volunteer or do anything he could for the institution. Now with pediatric oncology as an interest of his, he feels like this is a way to make up for lost time. During his college years, like most students, he didn’t know what he wanted to do. Now that he has found focus and a plan, he feels great about the work he’s doing for the research hospital.

He had some powerful words about legacy and why he really thinks this matters.

“The biggest motivator is the chance to help these kids because my running and contributing to this research helps save their lives. My contribution lives on 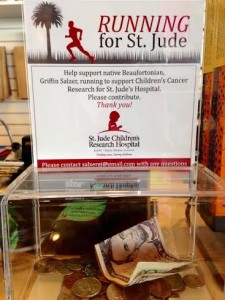 through bloodlines after I’m gone, and that’s building a legacy. To know that my running helped fund the research that made a sick child better- if that’s not worth running for, I don’t know what is.”
Amen, Griffin. What a beautiful sentiment.

Griffin hopes to expand his running route this fall, expanding to do the bridge loop. He hopes to have boxes set up at Grayco, Publix, Groucho’s Deli, and other Lady’s Island hotspots.

And we’re so glad you do, Griffin!

If you have an interest in helping Griffin and the kids at St. Jude’s by placing a box at your local business, please send an email to salzergj@gmail.com. 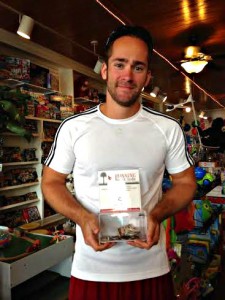 ‘Meet a Local’ is all about Beaufort’s people who, in their own way, help to make our community the special place that it is.